"Serb-Albanian relations must be resolved once and for all"

Serbian President Aleksandar Vucic has said that "a difficult compromise" when it comes to Kosovo does not mean that only one side is satisfied. 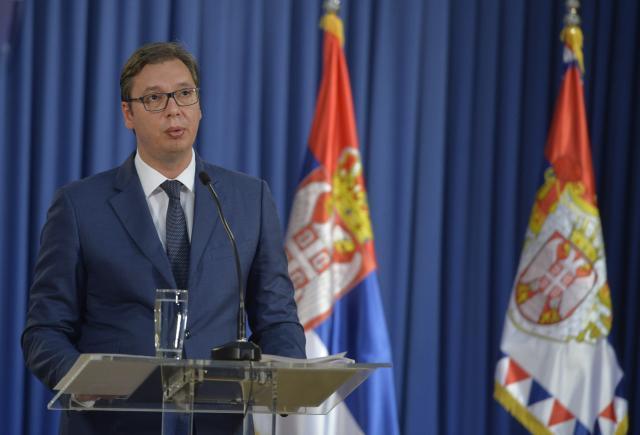 He said that when it comes to Kosovo a compromise was important, "in order to live in peace."

"I would neither add nor take anything away when it comes to what I said at the UN. Kosovo will not join the UN, unless we are satisfied with something, and we cannot be satisfied if they want us to recognize Kosovo," Vucic told RTS late on Tuesday.

He added that he was "sure that not everyone can be satisfied, but Serbia insists that the agreement cannot be such where one side is satisfied, and the other not."

Vucic stressed that it was "important to resolve the Serb-Albanian relationship once and for all."

"I want to tell Serbs that we have a reality, that we do not live in a mythical past, but that we also have not lost everything. The reality stands far from these two positions," the president stressed.

When asked if he can guarantee that there will be no armed conflicts in Kosovo, Vucic said:

"No one can ever fully guarantee this, but it is a great achievements of the talks that in the last four years no Serb has been killed in ethnic conflicts. The biggest problem is with the expelled, they are not allowed to return. We now must look ourselves in the eyes and we say what is real and what is objective - not to give away something that is ours, what we control."

Asked how much longer the Kosovo dialogue could last, Vucic said that it was a question of months.

"We do not have time for years. I would love a solution, if it there is none, it will be a frozen conflict," the president said.

According to Vucic, those who criticize the Serb List - which supported the government of Ramush Haradinaj - are "very hypocritical."

"In the same way a deal with Self-Determination, which advocates a Greater Albania, would have been criticized - or should we wait for the next elections with a pledge of six to eight percent of the Serbian population in KiM (Kosovo and Metohija)," he added.

Vucic said he supported the Serb List's decision, although, he added, "Serbia will not change its stance on Haradinaj."

"In Serbia, he is charged with war crimes and I do not intend to defend myself from those who have never been to Kosovo. I received the support from 80 percent of Serbs in Kosovo in the presidential elections, not because I was beating war drums, but because I went to every village," he said, and remarked:

"Whatever you do is no good because nobody wants to look in the mirror."

Vucic also said that the internal dialogue on KiM was "very much underway" and that he was "ready to hear all actors," adding that the government will take over the logistic part of the dialogue.

He denied that Kosovo and Metohija was lost, adding that he wanted to tell Serbs that "we have a reality that is not such that we like it."

"If Kosovo and Metohija were lost, I would not have fought so much concerning it every day. I personally suffered most severe threats, and one day I might write a book about it, and describe how it happened, because unlike others, I don't intend to do this job my whole life," Vucic said.

He recalled that he was "the strongest and most firm in his positions when Albanians were to be brought to the north of Kosovo as policemen."

"They threatened me that my career was over, that I had failed, that they already had such cases, that they would destroy me. My message was that I was doing my job, and that I don't accept it," he said.

On the criticism of the opposition that the dialogue came late, he asked why they did not launch it by 2012.

"We were not able to prevent them from appearing as a more important factor in sports organizations. Thanks to our mistakes, whose, I don't want to talk about at this moment, but I will definitely speak about it sometime," he announced.

Speaking about his recent visit to New York, where he addressed the UN General Assembly, he said the situation in the world was "entangled" and noted that he "does not remember that it was ever so complicated".

"Someone said at the UN that it looks a bit like a mad house, I cannot agree with it, but things are entangled. The most important thing is that we do not find ourselves in that whirlpool, to keep Serbia in a quiet port," he said.

"As for the UNESCO, we have achieved a lot, as for the Interpol - China did not grant them (representatives of Pristina) visas to enter China for the Interpol meeting because they filed their request as the state of Kosovo, and China does not recognize that state," Vucic said.

He also said that Serbia will be "stronger than ever in a few says", and mentioned Russian MIGs, Russian and Serbian tanks...

"You are as strong as you are able to safeguard your homeland, not to attack anyone,. Your strength cannot be in arrogance, but in the economy - but you must have defensive power," Vucic said.