On October 16, 2017, Maltese investigative journalist Daphne Caruana Galizia was murdered in a car bomb attack in the town of Bidnija, near her family home. 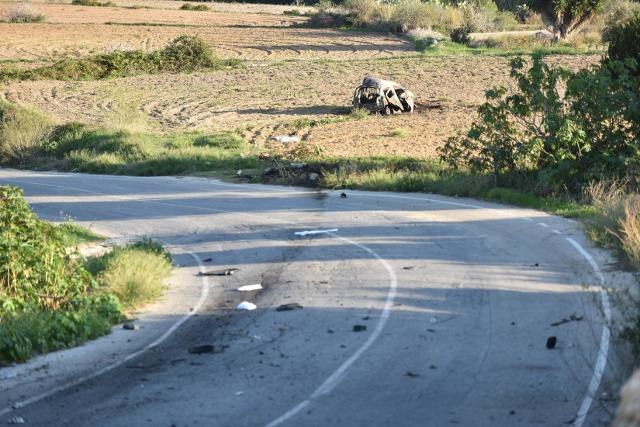 The wreckage of Galizia's car lies next to a road in Mosta (Tanjug/AP, file)

One year on the International and European Federations of Journalists (IFJ/EFJ) deplore the lack of an independent public inquiry and the unwillingness of the Maltese government to take concrete action to end impunity around this crime.

Daphne Caruana Galizia was a prominent investigative journalist who published a blog Running Commentary, one of the most widely read websites in Malta.

She had been targeted and sued many times for her writings in which she exposed several corruption scandals involving Maltese politicians. She was the first to break the news on Maltese politicians’ involvement in the Panama Papers in April 2016.

Fifteen days before being murdered, Caruana had filed a police report saying she was being threatened.

Opens external link in new windowThe IFJ and EFJ and their affiliates have continually expressed their solidarity following the killing, issuing statements and publishing solidarity pictures on social media with the message #solidaritywithDaphne, demanding a swift investigation into her murder.

In December 2017, theOpens external link in new window investigation into Daphne’s murder resulted in the arrests of only a few suspects. Three of them, brothers George and Alfred Degiorgio, together with Vincent Muscat were charged with her murder. However, the federations denounced the failure, so far, to identify the masterminds behind Caruana’s assassination.

The journalist’s family has filed a legal claim against Malta’s police force and alleged that the investigation had not been conducted independently nor impartially, because of connections between a senior police investigator and a government minister. Both were subjects of publications on Caruana Galizia’s blog.

Her relatives also urged the police to examine the financial transactions that could help uncover vital evidence. They believe the Maltese government is corrupt and is indirectly responsible for her death.

IFJ General Secretary, Anthony Bellanger, said : "Sixteenth of October 2018 marks the sad anniversary of Daphne’s death. The IFJ honours the memory of a bold investigative journalist who dedicated her career to reveal and denounce corruption. We deplore the fact that the murder investigation is still at an impasse and we still do not know who was behind it. We demand justice for Daphne and her family and an independent and impartial public inquiry. There shall be no impunity for crimes against journalists."

EFJ General Secretary, Ricardo Gutierrez, added: “In the past three years, 18 journalists have been murdered in the EU Member States and in the EU candidate countries. This situation of extreme gravity requires a strong reaction from States to better protect journalists. It also requires a fierce fight against impunity. We are waiting for concrete gestures, beyond the symbols”.

To honour Daphne’s memory on the anniversary of her death, the International Federation of Journalists and the European Federation of Journalists (IFJ/EFJ) invites all journalists and supporters of the journalist to join the Opens external link in new windowsilent vigil organized by Daphne Caruana Galizia‘s family and friends in Brussels, on 16 October, at 12h00, in front of the Residence Palace. (Facebook event)