"If the activities increase, we have no other way out" VIDEO

Epidemiologist Predrag Kon announced that there is a possibility of introducing emergency measures, if the tendency of growing number of infected continues 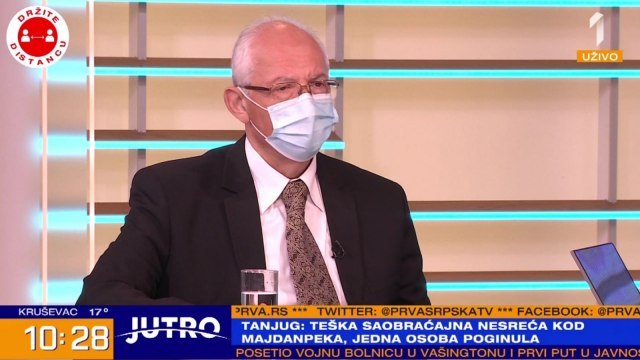 He told TV Prva that the situation would be especially epidemiologically bad if we face with the situation of one patient per 1.000 inhabitants.

"The whole strategy relied on the fact that the virus would weaken during the summer and spread more slowly. We in Belgrade have a worse situation than in April. We had those celebrations and those places of super-transmission of the virus, then it doesn't matter which season we are in. We will have those supercarriers. We have to understand that the virus is a very serious enemy," Dr Kon said.

He said that all places that are crowded should be avoided.

"We have entered a situation when wearing masks indoors ensures that there is no transmission of the virus, which includes shopping malls, public transport... you cannot always control the social distance," epidemiologist Predrag Kon said.

"The WHO came out without evidence of airborne transmission, but there were scientists who put forward the thesis that it is possible that the virus remained somewhere where there were infected," Kon explains.

He said waiting for the test for four to five days makes it difficult to monitor the situation. He also says that he hopes that there will be no emergency measures.

"We have no other way out if the increasing activity continues, we have no choice but to propose lockdown, whether it will be a state of emergency or emergency measures, that is already a question. I hope there will be no need for that, although we still have an increase in the number of the infected", Dr Kon concluded.

He said that the transmission of the virus also depends on how close the contact was, and that you do not necessarily have to become infected if you have been in contact with an infected person.

As he said, it is important to respect the measure of one person in four square meters, which also refers to taking exams at faculties.

When asked about going to the pools, Dr Kon pointed out that these are risky places.

"Pools are places of high risk, there is the issue of limited use, each pool has a limit on how many people it can receive," Kon said.

He said that kindergartens must work, although epidemiologists would close everything. As he says, it is fortunate that small children have mostly mild symptoms if an infection occurs.

The epidemiologist said that it will certainly be challenging and unpredictable when the flu season comes again.