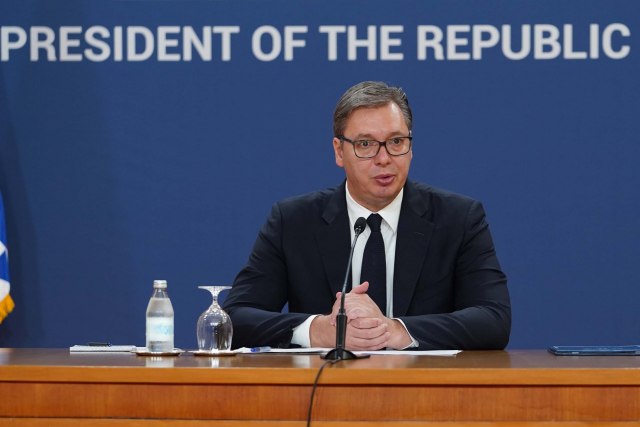 "I hold a high opinion of Ana Brnabic. She has done well and in the interest of Serbia and there is nothing much to criticize her for. I think she is a good choice," he pointed out and added that she pursued a disciplined and responsible policy.

He was asked why this decision was waited for 106 days.

"I needed to make a concept of what the government would look like. I talked to everyone. During that time, people could see, unlike those enjoying themselves at seaside, I worked hard, I was with Putin, Erdogan, Trump. A lot of things happened for a short period of time", Vucic said.

Vučić also said that he proposed to the prime minister designate that the new government, if possible, should be composed of 50 percent or more of women.

"I think it would be revolutionary for Serbia, we would present our country in the best possible way and we would show in practice how gender equality works," Vucic stated.

He stated that there was no talk of possible coalition partners at the session of the party's presidency today.

He reminded that he talked to everyone who secured the parliamentary mandates, and that the partners will be known in five to seven days, and the choice, he says, is up to the prime minister.

He points out that he expects significant changes in the government, especially when it comes to the party he leads.

He spoke about the messages coming from Pristina.

"It is our obligation that, while facing the challenges, and the biggest are the pressures around Kosovo and Metohija and the attempt to force Serbia to recognize the independence of Kosovo, without getting almost anything for it, we show willingness to always express our intention to talk and reach a compromise solution. We certainly do not accept the humiliation of the citizens of Serbia, and our citizens in Kosovo and Metohija", Vucic said.

In his address at the Palace of Serbia, he emphasized the importance of the fact that the previous elections passed peacefully.

"It is very important that the elections passed peacefully, without any incidents, and it is important that the citizens of Serbia showed how much they respect democracy and elections," said Vucic, adding that the turnout was higher than in many other countries.

"We managed to make the country, which has always been among the last when it comes to economic progress, among the leading countries, and that should not be accidental," Vucic said, adding that it was a result of a hard work.

He said that it was important to point out to the future prime minister-designate the three basic goals of Serbian politics.

He specified the new goals of the Government.

"The new government will aim to raise Serbia's economic strength - the standard of living of ordinary people must continue to rise even though it is impossible in any other country at the time of the coronavirus epidemic. Then, further construction of roads and railways, what has already been agreed on. We are also working on new projects, which we, as a state, will embark on fiercely. And the third goal is to strengthen the health care system of Serbia", he said, adding that we must strengthen the army and police.

"We must be one of the most successful European countries"

Vučić said that the current Government of Serbia managed to bring Serbia to be among the first and that this has been going on for four years.

"Before that, we went through the most difficult possible reforms, through the Labor Law, through fiscal consolidation, through political and economic reforms that few countries have managed to undertake," Vucic said.

The second challenge is the health situation, when the coronavirus is more strongly present, said Vučić.

He added that the third challenge is how to maintain the economic rhythm during the time of COVID-19 epidemic and closed borders with Europe and the world.

"We must strive to be one of the most successful European countries," Vucic said.

In accordance with that, as he says, he wanted to point out to the prime minister and the parliamentary majority that Serbia is a free, independent and sovereign state, which is on the European path and which will preserve friendly relations with Russia, China, but also build better relations with USA.

"Those are the three key goals. The new government should raise the economic strength of Serbia," Vucic concluded.