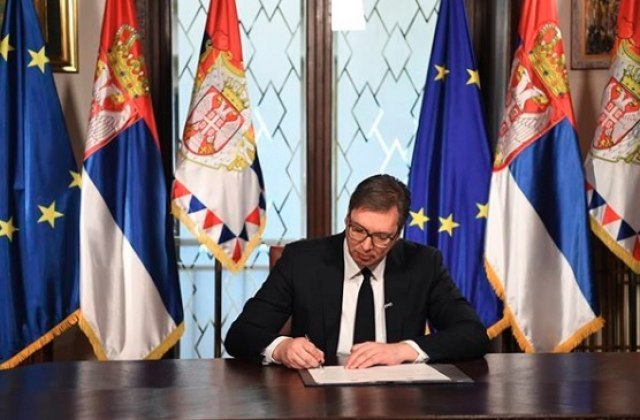 "Dear citizens of Serbia, I just signed the decision to call parliamentary elections. They were called for April 26 this year. I wish everyone success," Vucic said.

President said that elections are an important act for the country, because they decide what kind of country they want to live in, so the elections present great responsibility, not only for political parties and citizen groups that participate in them, but they are also crucial for every citizen of Serbia.

That is why he urged citizens to take part in the elections.

"I encourage people to take part in the elections, to show seriousness and responsibility towards their country, convinced that they will choose the best path for themselves and their families, but above all, for our beautiful Serbia," Vucic said.

He stated that he wanted, above all, on election day, but also throughout the campaign, to have a democratic atmosphere, that political opponents should be respected, that they come out with different views and arguments, and that the campaign be competitive but peaceful.

“There will be some passion and raised voices, as there have always been, but the important thing is for everything to pass in a democratic atmosphere and in peace,” the president said.

"I am confident that people can make the best judgment about the politics that preceded ours, but also about the policies that should contribute to a better future for the citizens," Vucic said.

He wished all the participants a good and democratic political game. "I would like us to congratulate each other on the evening of April 26th and move towards a better future together and united. Long live Serbia," Vucic said at a news conference in the Serbian Presidency building.

The Serbian Parliament has 250 members.

The previous parliamentary elections were held on 24 April 2016.