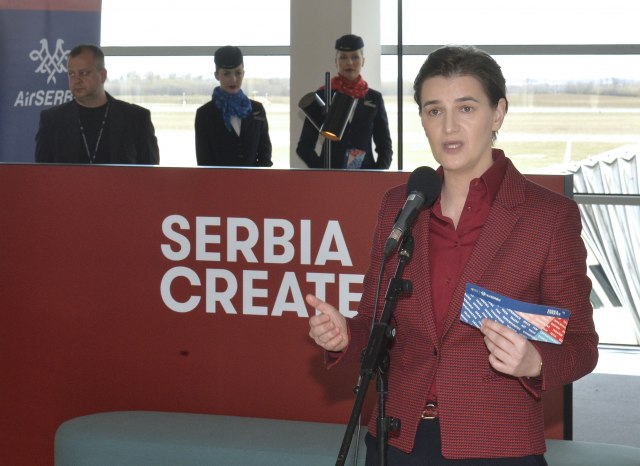 Prime Minister Ana Brnabic announced on Tuesday that the state's support to creative industries and culture as one of the basic preconditions for Serbia to transform and become an economy based on knowledge and innovations.

At the opening of the passenger area at Nikola Tesla Airport, which was designed by the national platform “Serbia Creates”, Brnabic said that Serbia is not a country of cheap labour, but smart, creative people, the Serbian government said on its website.

Our country will, as she said, certainly be one of the winners of the fourth industrial revolution and a country that will make a step forward in this.

She pointed out that it is important for Serbia to show itself in a different light because it has enormous potential, since we are the country of innovative, creative people who can give a lot to the world.

With the support of the Creative Industries Council, whose members unselfishly shared their knowledge, experience and international connectivity, we created a brand of our country – Serbia as the country that creates, the Prime Minister explained.

According to Brnabic, creative industries are, along with the IT sector, one of the fastest growing sectors and businesses, which employs 115,000 people between 25 and 45 years of age.

Accordingly, she said that we must support our creators to find the audience in the world because then we all do something very important for Serbia.

Brnabic noted that there is a great partnership with Nikola Tesla Airport and Air Serbia, as the airport is the first place seen by people coming to Serbia.

Now our Air Serbia plane for New York is branded, and we are again showing the whole world what Serbia has to offer, the Prime Minister pointed out.

She announced a series of activities for this year that will present Serbia differently and will show to the creators that the government cares about them, not only financially, but also in a strategic way, because we understand their importance for Serbia.

According to Brnabic, a creative embassy will be opened in London, on 21 September, a retrospective exhibition will be organized by Marina Abramovic, while on 23 May, world minds will gather in Belgrade at the "World minds" event to showcase the latest innovations.

Also, as she announced, a workshop at Dorcol will be opened in cooperation with the National Theatre for young artists.

The airport will feature a space for passengers with fast internet and will offer information about hubs in Serbia. This space was created by “Serbia Creates”, designed by the Creative Industries Council, at the initiative of the Prime Minister.

The conference also presented the co-working and co-living sectors in Serbia, which record an annual revenue of EUR 3 million.