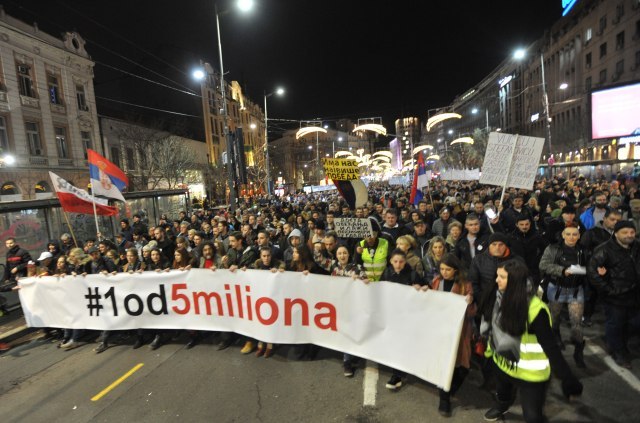 At the ninth One of Five Million protest march in Belgrade, which took place on Feb. 2, the protesters left messages for Serbian President Aleksandar Vucic, explaining the reasons why they had taken to the streets and criticizing Minister of Education, Science and Technological Development Mladen Sarcevic's statement and voicing demands that he resign.

Three boxes were placed outside the Serbian Presidency building, and the marchers put their letters inside, explaining why they had been protesting for nearly two months. The organizers quoted Vucic as saying that he did not know the reasons for their discontent, hence the boxes.

A performance outside the Serbian Broadcasting Corporation (RTS) headquarters was part of Saturday's march, leaving the RTS door covered with stickers displaying the faces of the RTS public service, Dragan Bujosevic, and Pink TV's director Zeljko Mitrovic merged into one.

The pillars around the door to the Politika newspaper premises were also covered with stickers saying "Censored", "One of Five Million" and "It has started."

A professor at the Belgrade School of Philosophy, Marija Bogdanovic, said that thinking men and women were protesting against the rule of "an over-learned leader," for freedom, justice and democracy.

Bogdanovic criticized the education minister, Sarcevic, for his statement on the marchers, describing him as "one of the clones of the over-learned," and that nothing else could have been expected.

"We did not expect anything good, and it cannot get much worse either. The minister showed that his department means nothing to him," Professor Bogdanovic said.

Marko Selic Marcelo, a singer and author, said that he had decided to address the rally because he felt it was his civil duty, and for honor and freedom.

A representative of the Association of Raspberry Producers, Sladjana Stankovic, said she had decided to join the protests to voice the discontent of all agricultural producers.

The organizers thanked the students of all faculties for their support and read a letter by students of the Faculty of Political Sciences, who want Minister Sarcevic to step down for saying that "there are no seriously important names" among those supporting the protests, and that it was all pensioners and young scouts doing the marching.

The rally ended with the message that the government would not survive the wave of freedom and the next rally was scheduled for Feb. 9.