"Serbia committed to improving relations with US" 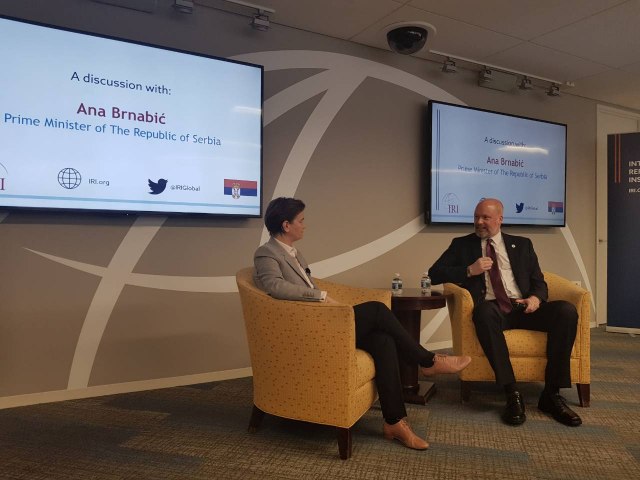 Stivers is the next chair of the Serbian congressional caucus, the Serbian government announced.

In a conversation with Cotton, Brnabic said that the visit to the United States was "an excellent incentive to further strengthen the overall relations of the two countries."

Serbia is committed to improving the cooperation with the United States, the prime minister stressed.

Brnabic and Cotton agreed that the military cooperation between the two countries is good.

Special mention was made of the excellent cooperation of the Serbian Army with the National Guard Ohio, within the framework of the State Partnership Program of Serbia and Ohio.

Stivers is a member of the Ohio National Guard, who visited Serbia several times in the framework of the joint military activities of the two countries and will take over the co-presidency of the congressman Poe from the beginning of the next year.

He said he plans to strengthen the composition and scope of the activities of the Caucus.

Brnabic thanked Stivers for dedicated cooperation and personal engagement to promote topics of interest and interest to Serbia.

The Prime Minister had a presentation at the International Republican Institute in Washington and met with members of the representatives of the American-Israeli Public Affairs Committee.

Brnabic spoke with the representatives of these organizations about the process of Serbia's accession to the European Union and economic reforms, as well as the government's priorities regarding digitization, education, strengthening institutions and the rule of law.

During her first visit to the United States in the capacity of the prime minister, Brnabic hosted a ceremony in the US Congress yesterday to mark the 100th anniversary of the raising of the Serbian flag in front of the White House.

The ceremony was attended by the first Deputy Prime Minister and Minister of Foreign Affairs Ivica Dacic.

The prime minister visited the New York Stock Exchange, where she spoke with President Stacy Cunningham, the first woman headed by the institution since its founding 226 years ago.

Earlier today, Brnabic also spoke with Senator Ron Johnson, chairman of the Subcommittee on Europe for the Senate.