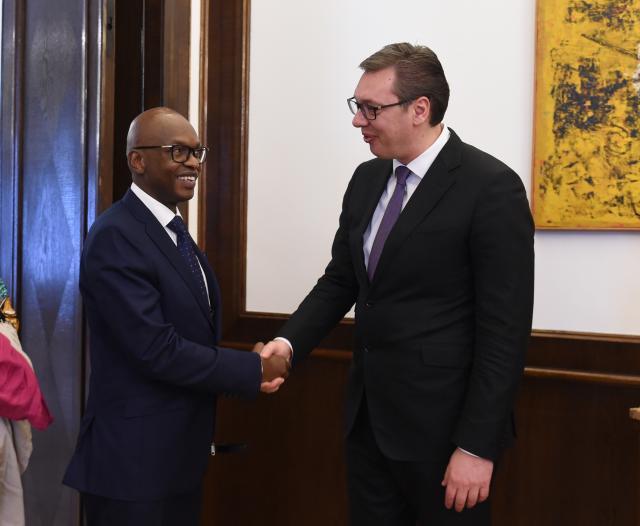 Vucic on the occasion "expressed great gratitude for the country's decision to revoke its recognition of the unilaterally declared independence of Kosovo."

Vucic handed to Nyamitwe a letter for Burundian President Pierre Nkurunziza, in which he also expressed gratitude for the move, and invited him to visit Serbia, so they could work together on fomenting inter-state relations.

The president also announced that Serbia would soon open its diplomatic office in Burundi's capital, Bujumbura.

Nyamitwe conveyed President Nkurunziza's greetings, and stressed that the clear instruction to revoke the recognition of unilaterally declared independence of Kosovo came precisely from the head of state - after all the circumstances had been carefully considered, including relevant international acts, such as UN Security Council Resolution (1244), and the friendly relations between Belgrade and Bujumbura dating back to the former Yugoslavia era.

The two interlocutors agreed that there were many opportunities to develop cooperation in the areas of trade, defense and security, mining and public finance, as well as in education, culture and sports.

They "expressed expectation that the eight proposed interstate agreements would be harmonized as soon as possible, which would be the basis for more intense contacts and stronger ties between Serbia and Burundi," the statement said.

Aime Nyamitwe, who is on an official visit to Serbia, was on Monday received by Foreign Minister and First Deputy PM Ivica Dacic,

Dacic told a joint press conference after the meeting that Serbia and Burundi are two friendly countries and expressed the need for cooperation and mutual support in international organizations.

He thanked the African country once more for the decision to withdraw the recognition of Kosovo's independence.

Nyamitwe said that relations between the two countries have been good since the times of the Federal Republic of Yugoslavia and recalled that Yugoslavia was one of the first countries to recognize the independence of Burundi.

He underlined that his country withdrew the recognition of Kosovo independence because it is against foreign policy principles of that country, the Serbian government said on its website.