Serbian President Aleksandar Vucic has arrived in Moscow for a three-day visit to Russia, during which he will speak with Russian President Vladimir Putin. 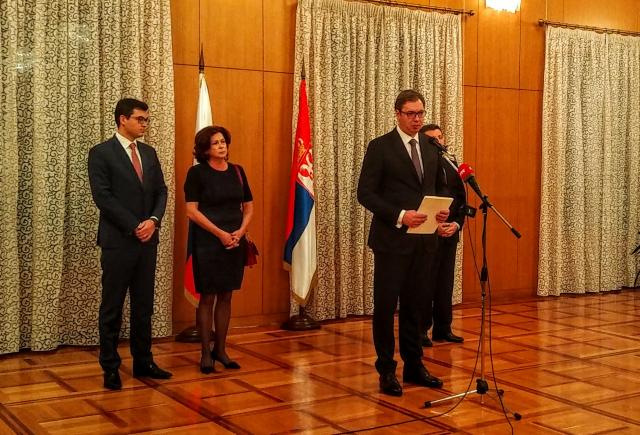 Vucic described the meeting with Putin, that will take place on Tuesday, as "big and important."

On Monday evening, Vucic presented the wife of late Russian Ambassador to the UNVitaly Churkin, Irina Churkina, with the Order of the Serbian Flag 1st Class.

In a ceremony at the Serbian embassy in Moscow, Vucic said that it was thanks to Churkin that the Serbs had not been labelled as a genocidal nation.

"Vitaly Churkin left a major mark in Russian and world diplomacy. The Serbian people will remember Churkin as a person who struggled for justice in Kosovo and also in Bosnia-Herzegovina," Vucic said, according to Beta.

Churkin was known as a great friend of Serbia, who as Russia's representative voted to block a draft British UN Security Council resolution on Srebrenica, and during the body's sessions dedicated to Kosovo energetically criticized Pristina institutions, warning that the situation in the province was far from what the authorities there wished to make it appear to be.

In the Time Machine Hall, Vucic and the Serbian delegation were given a presentation of Moscow from its earliest days to the present time, Tanjug reported.

"Projects for the coming year"

The topics of Thursday's talks with Putin have not been officially announced, and after Russia delivered six donated MIG-29s to Serbia, "the only thing certain is that further improvement of military cooperation will be high on the agenda of the two presidents," Tanjug said in an article early on Monday.

During a recent visit by Russian Defense Minister Sergei Shoigu to Serbia, Vucic expressed interest in Buk-2 systems (one of the most modern mid-range missile systems) and Panzir (mid-range and short-range missiles) and the media suggest that this could also feature in his conversations in the Kremlin.

Promotion of economic cooperation will also be one of the most important topics, especially energy, and within that perspective, Serbia's inclusion in the Turkish Stream project, as well as gas supplies.

He said the visit comes at a time when Serbia is under pressure for its connections and relations with Russia, and was being asked "not to sit on two chairs."

Vucic repeated several times during the interview that his country was "sitting on the Serbian chair" and that the country was "clearly determined in favor of joining the EU, but also for cooperation with Russia" and would never impose sanctions on Russia.

According to Serbian Foreign Minister Ivica Dacic, several new agreements with Russia are expected to be signed during the visit of the Serbian delegation, while economic projects and investments will be agreed for the coming year.

The delegation led by Vucic will include Defense Minister Aleksandar Vulin, Minister of Economy Goran Knezevic and Minister of Technological Innovations Nenad Popovic.

Previously, Vucic and Putin talked in the Kremlin in March while Vucic was still serving as prime minister.