"Serbia is too important to remain neutral"

Serbia is too important a factor in the Balkans to be conducting a neutral foreign policy, says President of the Atlantic Council of Montenegro Savo Kentera. 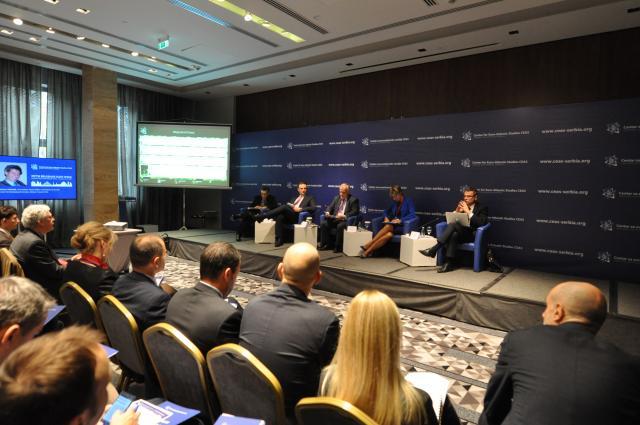 Other participants in Friday's Belgrade NATO Week panel dubbed, "NATO and the Western Balkans," were of a similar opinion, Tanjug is reporting.

Jelena Milic, director of the Center for Euro-Atlantic Studies (CEAS) - the NGO that is organizing the gathering - stressed that unlike the time when Eastern European countries were joining NATO, "this is an interesting, dynamic, but also a complicated period for the Western Balkan countries."

"Russia was not revisionist when Eastern European countries were joining the alliance. Today times are hard, the consequences of Brexit on NATO, the EU and European integrations process cannot yet be guessed," said Milic.

She thinks it is "absurd" that support for EU membership fell under 50 percent in Serbia during the current authorities. "The EU is being presented here as one of two evils. That is why our attempt is to explain to the general public that we cannot separate the transatlantic alliance from the European Union," Milic said.

According to her, apart from "Russia's hostile activities" there are additional security threats in the region. "The process of reforming the security system in Western Balkan countries has been stopped, the second problem is that there is a complete delay in war crimes trials before regional courts, as well as a complete destruction of previous judgments passed in The Hague," said the CEAS director.

She believes that NATO members should be politically present in the Balkans. For Milic Montenegro's NATO membership was the best news that "arrived from the Balkans" in the last ten years.

Savo Kentera said that the country's admission to NATO showed that the West still sees the Balkans as its own sphere of interest, and that Russia lost the battle in that case. He added that it had not been easy to be explaining to the people of Montenegro for 11 why this country should become a member of NATO.

"It was necessary to break the myth about relations between Montenegro and Russia, and about how we cannot be without each other," Kentera said. He thinks that the next candidate for NATO membership is Macedonia, where, he remarked, conditions for admission have been created - especially since that country got a new government.

The president of the Atlantic Alliance of Montenegro also believes that the policy of neutrality of Serbia is not sustainable in the long term.

"Serbia is too important a factor in the Balkans to be neutral and cannot sit on two or three chairs. Montenegro tried it, too, but eventually we decided to look to the future, not in the past, and Serbia should look at what is in the interests of its citizens, not Russia, America and the EU," Kentera said.