Serbian President Tomislav Nikolic says Serbia continues to rely on Russia and will never impose sanctions against that country despite the pressure to do so. 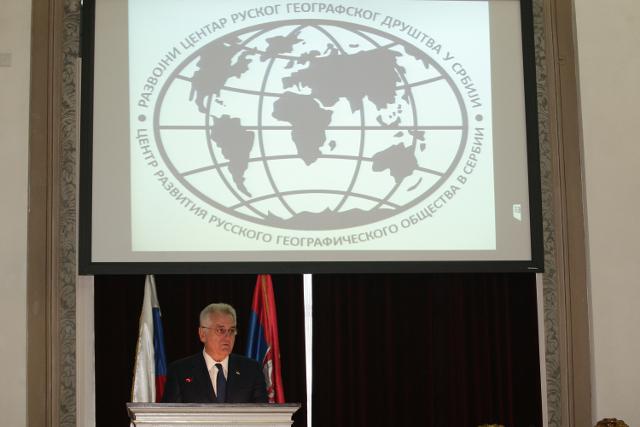 ''We do not want the others to choose our friends for us, just as we are not choosing friends for others. We will always stand for solving misunderstandings in international relations through dialogue, in a peaceful and dignified manner," Nikolic said on Monday.

He was addressing a ceremony marking the opening of the Development Center of the Russian Geographical Society in Serbia.

The president added that Russia is today a country without whom no important international issue can be solved.

''We are aware that, without cooperation with Russia, we would not be able fully to achieve our national interests, among which the most important one is the preservation of our sovereignty and territorial integrity, especially before international organizations," Nikolic said.

The Serbian president said that the opening of the Development Center of the Russian Geographical Society was a concrete step within our strategic partnership and a confirmation of the firm mutual ties in the Serbian-Russian relationship.

''For us, this is a clear signal that Serbia has become an important point of reference in Russia's geostrategic considerations," Nikolic said, adding that Russia has been "one of our most important pillars of support during almost our entire history."

According to the president, the very rich and meaningful history of Serbian-Russian relations "has unfortunately not been fully explored yet."

Nikolic also said that the cooperation between Serbia and Russia is extremely deep and layered and should be seen through a series of complex social phenomena, and layered and interdependent connections and relationships "rooted in our hearts."

The Russian Geographical Society, he continued, is one of the oldest geographical societies in the world, founded in 1845 by a decree of Tsar Nicholas I, whose Council of Trustees is now chaired by President Vladimir Putin.

The main activities of the institution are expeditions and research, education, preservation of tradition and culture, publishing and working with young people.

Nikolic also noted that the Serbian Geographical Society, the first geographical society in the Balkans, was founded in 1910 by Jovan Cvijic, who was also its first president, with the task of fostering contacts "with neighboring sciences and exploring the Balkan Peninsula."