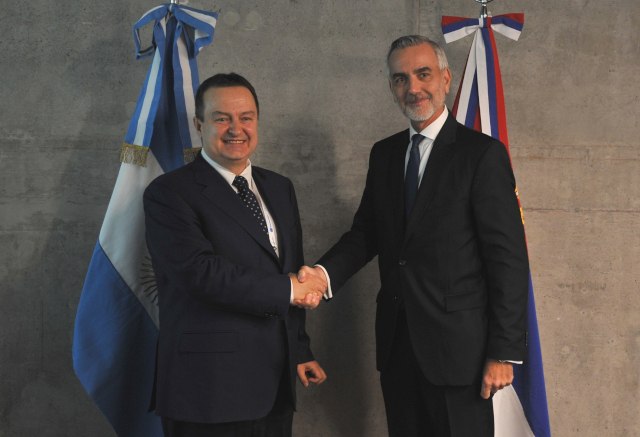 The meeting took place on the margins of the UN Conference on South-South Cooperation, held in Buenos Aires, the Serbian government said.

On this occasion, focus was placed on bilateral reflections and multilateral cooperation, when it was concluded that political relations are on the constant rise.

Dacic said that additional political effort should be made and the officials exchanged information on the export capacities of the two countries, as well as on concrete projects and the upcoming visit of Argentinean businesspeople to Serbia.

The interlocutors exchanged information on the export capacities of the two countries, as well as on concrete projects and recent visits of Argentinian businessmen to Serbia.

The Argentinian official offered exchange of experiences in the field of food safety, as well as transfer of agricultural technology.

Dacic expressed gratitude for Argentina's support to Serbia in international organizations, stressing the importance of consistent respect of territorial integrity and sovereignty of Serbia, as well as of Argentina.

In line with that, Zlauvinen stressed that Argentina would not changing its position on the non-recognition of Kosovo's unilaterally declared independence.

Agreement was reached during the meeting to continue cooperation in all multilateral forums, the Serbian government announced.