BELGRADE -- Shaip Kamberi said he sees the future in cooperation with Serbia, but negotiating team should know how to talk to people whose children were killed by the Serbs

BELGRADE -- Shaip Kamberi said he sees the future in cooperation with Serbia, but negotiating team should know how to talk to people whose children were killed by the Serbs 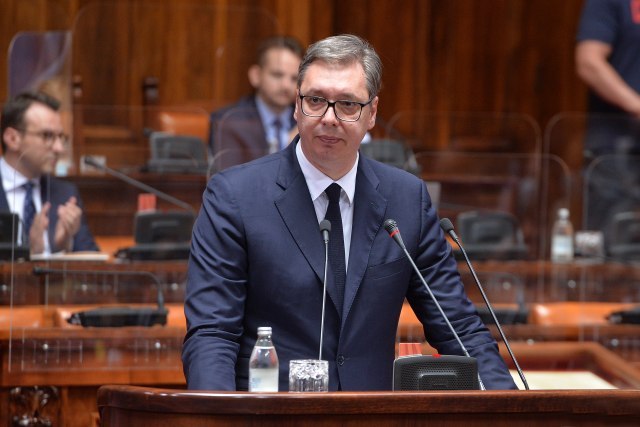 President of Serbia, Aleksandar Vučić, responded to his statement and said that he could not believe that Kamberi did not want to admit Albanian crimes, and only talk about Serbian ones.

"As a member of the Albanian people, I see a perspective in the EU, but also in the normalization of relations with Serbia. The formula for the coexistence of the Balkan peoples is understanding, everything else led to bloody conflicts. However, I believe that the Brussels dialogue expressed poor interest in the issue", Kamberi said.

"Hate speech and recycling of terms from the 1990s have no place in dialogue. I understand that Serbia represents its interests, but Serbia must understand that you are negotiating with people whose children were killed by Serbian Scorpions. Today it must be understood that Kosovo's independence is the result of Yugoslavia's breakup", Kamberi said.

"The Serbian public must know that the killings of the Albanian population were committed, and the Serb forces carried out widespread and organized attacks on the Albanians," Kamberi said.

"It should be noted that the daily satanization and insult of Albanians and Kosovo is not in favor of dialogue. The Declaration of Independence did not violate the Resolution. You, President, distanced yourself from Vuk Jeremic and his then decisions in the negotiations, and I think you need to distance yourself. Today, Serbia has problems with its neighbors, with Montenegro, Croatia, and relations with Albania will depend on relations with Kosovo," Kamberi said.

Kamberi claimed that Serbia is systematically working on the marginalization of Albanian minorities, and he expressed that as an objection.

Vučić answered: You would hide every crime of Albanians

Vučić said that he should be fair and acknowledged that it was not only Serbs who committed crimes and that he could not agree to that.

"You always knocked on the open door. I listened to you for 20 minutes and you could hear that we Serbs are neither saints nor angels. Hadn't Albanians committed crimes? I've never heard you talk about it. It's hard for me to believe that story", said Vucic. "You mentioned that Saranda Bogujevci will come, she can come. She is a woman who went through the hell of life. But she was admitted to Belgrade in 2013 to talk about a terrible crime against her family. And I have a counter-question for you, Mr. Kamberi, and those are the 10 locations", Vucic asked. Vučić also emphasized that he answered the question about the case of Saranda Bogujevci with a crime against the Sutaković family. "I'm asking you who will tell about the crime against the Sutakovic family, where three children were killed, criminally and together with their father and mother were buried so that they would never be found. They can't come to Pristina to tell you, because they didn't survive. But you didn't remember them. The difference between us is that I also remember Saranda Bogujevci and Sutakovic. But I don't understand you preaching to us, and you would hide every crime just because it was committed by an Albanian," Vucic said. "When did you hear something bad about Albanians from us? I don't think we are better than Albanians in anything," Vucic said. "It is not the one who dictated that text to you who wanted peace. And he did not want peace. But Serbia is for peace and that is why I will not apologize to anyone. Neither Kurti nor anyone who comes from Pristina," Vucic said.

Kamberi again expressed disagreement; Vučić: They want to make me a criminal

"You said that someone was dictating speeches to me, so you also think stereotypically about Albanians. So how do you perceive me here in Belgrade? The difference between us is that you were a minister at the time when these crimes were committed, I am not," Kamberi said.

Vučić answered and said that he knew that they wanted to present him as a criminal, which he had never been.

"I understood - he wanted to say that I am a criminal. They know that I did not participate in events of that type in Kosovo and Metohija. Why don't you tell people how many Albanians there really are to live in Medvedja, how many Serbs you expelled... now I will show you the graffiti I saw, this is graffiti: 'Jesus hates Serbs'. Do you have to show me graffiti like this on any mosque where Serbs live," Vucic said.

"I have known you not since yesterday, not since the day before yesterday, and I know very well what you want. You are only interested in acquiring political position. When you show us by your example that you respect Serbs and Serbia, you will also receive our respect," Vucic replied.

"I would never be a minister in an authoritarian government," Kamberi said.

"I am especially happy that you can speak like this. And I am sorry that you are not ready to praise my democratic potential, but yet you are able to praise Vuk Jeremic," Vucic answered. Више о овом изворном тексту За додатне информације о превођењу треба вам изворни тек