BELGRADE -- In recent days, epidemiological situation in Serbia has deteriorated sharply, so the Crisis Staff session is scheduled for Wednesday, February 24, at 8 o'clock.

BELGRADE -- In recent days, epidemiological situation in Serbia has deteriorated sharply, so the Crisis Staff session is scheduled for Wednesday, February 24, at 8 o'clock. 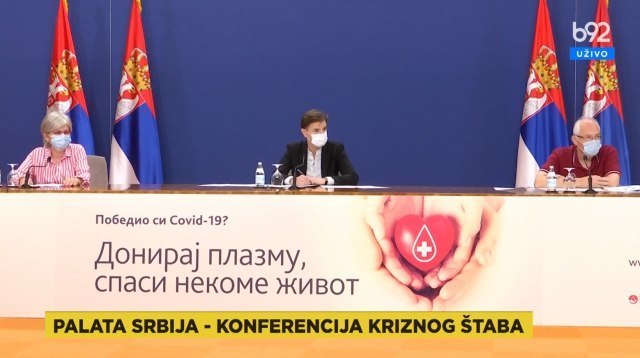 Epidemiologists warned about such consequences even before the extended weekend due to the national holiday of Sretenje.

Kon added that the medical part of the Crisis Staff is clear and that we cannot afford no new sudden increase in numbers.

The medical part of the Crisis Staff was quite clear when it came to the new measures. "One is related to working hours, and the other is ban on gatherings. When we talk about additional gatherings, we have to think about schools," Kon said explicitly.

“Certainly we have to consider schools because that was a problem in other countries,” he said. Kon emphasized that "the curfew is over", and that this measure requires a lot of time and effort. "The curfew itself is not a topic, but working hours certainly are," Kon stated for RTS.

He added that the most favorable solution for Belgrade, but also for Serbia, will be sought in terms of working hours.

The deterioration began in late January

Kon says that the worsening of the epidemiological situation started at the end of January, but that it is now even more visible.

"We warned everyone, we said that an extended weekend presents a risk, staying in various winter ski centers, that one should keep one's distance and that everyone who goes is at increased risk. Even after the holidays, it was noticed that the children who were in the winter centers brought the virus", Dr Kon stated.

According to him, the leap in the number of patients among high school students is noticeable, so there are grounds for tightening the measures, which will be decided at the session of the Crisis Staff on Wednesday.

"We have a situation where we see more illnesses in high schools than before. This week, it will be higher. There are also more positive cases in primary schools, but these are relatively small numbers compared to how many go to school. We don't have data to support full online teaching, but we can't keep quiet about it. We can't keep quiet about filling hospitals' capacities", the guest of the Belgrade Chronicle pointed out.

He stated that the COVID-hospital in Batajnica and Kruševac is being additionally strengthened, but that the number of people who work in those centers is the same. "We have clearly noticed that weekends are the main hit days and all kinds of gatherings happen during weekends. It's all life. You have to work with it. I listen well to Mr Vesić, but the other side should also be heard", stated Predrag Kon.

Around 1.200.000 people have been vaccinated in Serbia so far, but Dr Kon reminds that 420.000 received the second dose, and in order to talk about collective immunity, three million people need to be vaccinated.

Deputy Director of the University Clinical Center Nis, Radmilo Janković, warned on the eve of the extended weekend that epidemiological measures are not being respected.

"As far as I can see, a large number of them return infected. These are younger people who do not respect the measures. Then their friends, older family members get sick. The situation is such that out of 2.000 infected yesterday, 20 will surely die. I would be surprised if that number is smaller, it will probably be bigger", said the head of the COVID center of the Clinical Center in Nis, adding that the situation still requires maximum concentration and seriousness.

We have heard the same warnings from other doctors, especially those who are members of the Crisis Staff.