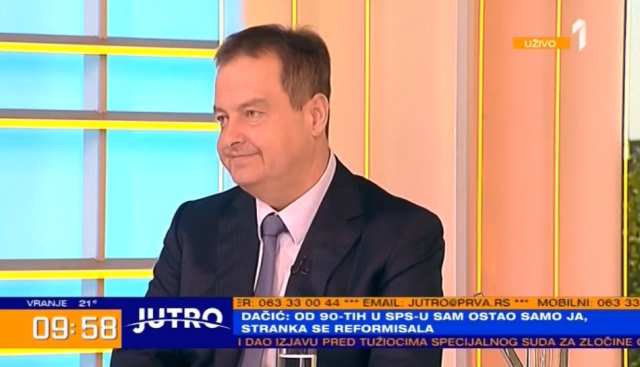 "He made this move in order to eliminate (President of Kosovo Hashim) Thaci and the others on the political scene, and to return as a victim of the Court for the so-called KLA", Dacic says for Prva.

"This is a tactical move, we will see whether he will be indicted or convicted", Dacic added.

As for the resumption of Belgrade-Pristina dialogue, Serbian Minister of Foreign Affairs claims that it is necessary that international community exerts pressure on Pristina, but states that the West has different perspective on the Kosovo issue.

"Brussels awaits for the new Chief of Foreign Affairs, France is certain that US is obstructing further dialogue, by supporting Haradinaj, while US deems that Germany favors Haradinaj. There are mutual accusations, while the dialogue is on hold as the tariffs had not been lifted", Dacic said.

"This is about constant introduction of unilateral acts, instead of dealing with the crucial issues, such as establishing the Community of Serbian Municipalities", he concluded.

Dacic also pointed out that there is an obvious change in the US Administration stance - "they now try to find solution, while so far they regarded Kosovo issue as resolved and closed".

"I am confident that new negotiation cycle will commence in September, but how successful those talks would be, we shall see", Dacic concluded.