Thousands of worshipers flocked to Istanbul to attend the first prayer in Hagia Sophia since it was turned into a mosque causing an incident with police cordon. 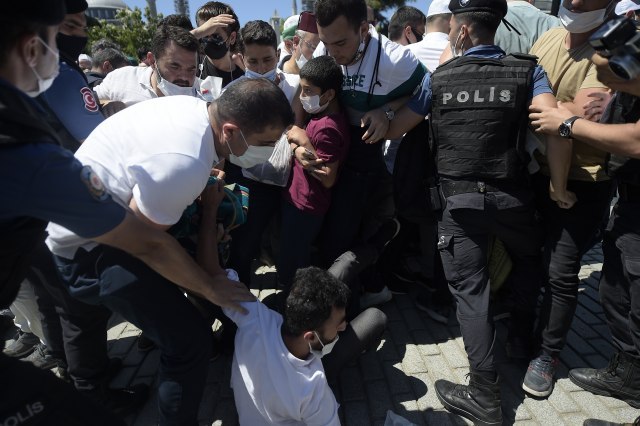 The decision to convert the ancient monument, revered by both Christians and Muslims, to a mosque, unleashed a torrent of criticism from church leaders, who said the conversion to exclusively Muslim worship risked deepening religious divisions. Turkey says the site will remain open for visitors and its Christian artworks protected.

At the same time, measures against the spread of the coronavirus have been neglected, the AP writes.

Thousands of worshipers and tourists occupied the streets around the mosque, and many slept in tents not far from the building.

The prayer in Hagia Sophia is attended by a large number of believers, including Turkish President Recep Tayyip Erdogan.

Orthodox Churches throughout Greece on Friday marked the conversion of Constantinople's Hagia Sofica to a mosque by mournfully tolling their bells in protests, flags were lowered on half of the spears, while the patriarch of the Greek Orthodox Church will serve a special mass this afternoon.

Greek government spokesman Stelios Petsas said that this is a difficult day and that "shadows hung over us" by turning Hagia Sophia into a mosque.

"It is something that has shocked Christians around the world, not just Greeks. We warned earlier that this would create an unbridgeable gap between Turkey and the Christian world," Petsas said.