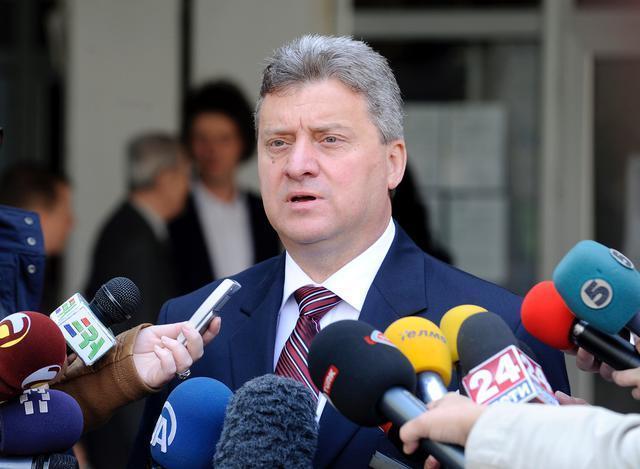 According to the website of the president, the letter was penned "in anticipation of the meeting of the European Council" and seeks to inform the recipients of "the current situation and the latest developments in the Republic of Macedonia."

Ivanov writes that his country "has been going through a deep political crisis for already two and a half years" and that "with the facilitating role of the EU and the US, the Przino Agreement was reached in whose essence is the organization of fair and democratic early parliamentary elections and formation of the Government of the Republic of Macedonia that would primarily focus on urgent reform priorities."

"On December 11, 2016, free, fair and democratic elections were held, which were welcomed by all sides. However, instead a way out of the crisis and focus on urgent reform priorities, we once again found ourselves in a deep political crisis. Namely, after the elections, three of the four parliamentary parties of the ethnic Albanians in the Republic of Macedonia, with 18 out of the total 120 MPs, facilitated by the Prime Minister of the Republic of Albania, Mr. Edi Rama, and the Foreign Minister, in Tirana, created a platform for the Albanians in Macedonia," the Macedonian president states, noting that the Tirana platform "has become a precondition for the formation of the government of Macedonia."

According to Ivanov, "the way it was adopted" and the statements of the officials of the Republic of Albania "and the Republic of Kosovo" have had "negative impact on the neighborly relations and destabilize the region of Western Balkans."

"This platform has led us to a standstill it is difficult to get out from because of its ultimate and blackmailing nature" he writes.

Ivanov said he refused to give a mandate to form the country's new government to SDSM leader Zoran Zaev - who reached a coalition agreement with ethnic Albanian parties - and that the decision came "in line with Article 84 paragraph 1 of the Constitution of the Republic of Macedonia" - because he refuses to give such a mandate "to anyone who negotiates platforms of foreign countries that blackmail the Macedonian people, jeopardizes the integrity of the state, its sovereignty and independence."

"Of all these things I have personally briefed Commissioner Hahn and the High Representative, Ms. Mogherini. I asked them to publicly and clearly condemn the platform as an act of interference in the internal affairs of a sovereign state and as a document that further destabilizes the situation and subjects us to internal-political, inter-ethnic and possible geo-political influences. I reiterate that this document is of ultimate and blackmailing nature that suspends the Przino Agreement where the European Union has involved its entire foreign policy credibility," the letter said.

"I believe that condemnation and rejection of this document is the only way out of the hopeless situation in which we find ourselves. Only in this way we will achieve the goals of the Przino Agreement, primarily the urgent reform priorities, political stabilization, reduction of inter-party and inter-ethnic tensions in the Republic of Macedonia and return of the country on the path to the European and Euro-Atlantic integration. In this context, I ask you to carefully see the reality we are faced with and put your efforts this harmful platform to be publicly rejected and condemned by the European Union and NATO and their member states. Furthermore, I expect you to condemn the flagrant interference in the internal affairs of the Republic of Macedonia by two of its neighbors - aspiring countries for full-fledged membership. Finally, I expect you to send a strong message to our vulnerable geo-political region for the inviolability of the borders in the Balkans and to reaffirm the European and Euro-Atlantic perspective of the countries from the region," Ivanov said, and added:

"The absence of public condemnation of the Tirana platform by the international community would only encourage similar attempts in our and in other regions in Europe with a complex ethnic, religious and linguistic reality."