Mitsotakis: Greece remains firm in its standpoint regarding Kosovo 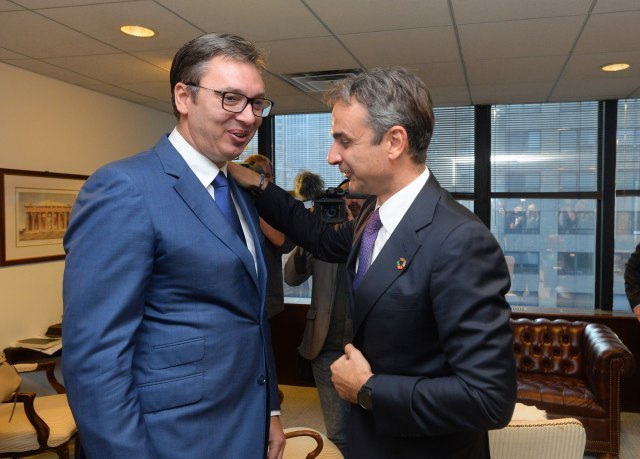 As it says in the statement, Vucic asked Prime Minister Mitsotakis not to change the Greek stand towards Kosovo's self-proclaimed declaration of independence, emphasizing that this is crucial for Serbia. Greece is among five EU member states that have not recognized Kosovo as a state.

Vucic underlined that Serbian and Greek people were linked with sincere friendship and that we should work on intensifying the economic cooperation. He thanked Greece for the support it gives to Serbia on the EU path, as well as on supporting Belgrade-Pristina dialogue.

Vucic briefed Mitsotakis on the problems arising from Pristina's decision to impose tariffs on the import of goods from Serbia.

Mitsotakis confirmed that Greece would not change its stance when it comes to recognizing Kosovo’s self-proclaimed independence.

The statement quoted Prime Minister Mitsotakis stating that his country supported the Belgrade – Pristina dialogue on the normalization of relations, adding that taking unilateral moves won't contribute to it, reiterating that Greece would not change its standpoint when it comes to recognizing Kosovo’s self-proclaimed independence.