"Serbian police have right to be in Kosovo; where are they?"

Russian President Vladimir Putin has said during his visit to Serbia that "the Russian position on the issue of Kosovo and Metohija is known." 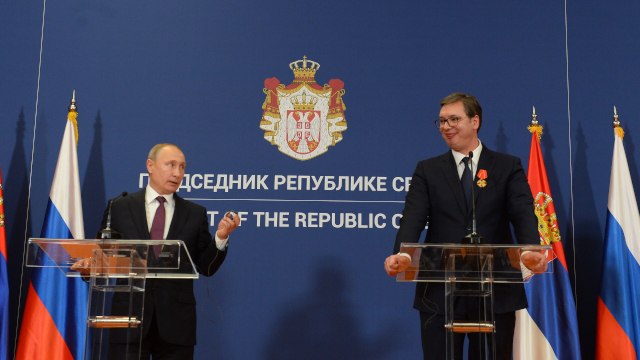 "We are in favor of a solution in accordance with UN Security Council Resolution 1244," Putin, whose country does not recognize the unilateral declaration of Kosovo's independence made by ethnic Albanians in 2008, said in Belgrade on Wednesday.

Addressing a joint news conference with Serbian President Aleksandar Vucic, he added that "the latsest moves of Pristina - the introduction of taxes (on goods from central Serbia) and the creation of the Kosovo army, have caused serious tension."

"Russia shares the concern of Serbian leadership and citizens because these moves can lead to a destabilization of the Balkans," Putin added.

Kosovo authorities have undertaken some provocative actions that have further exacerbated the situation, Putin said, citing an example of Pristina's decision to form an army, which, he said, was a violation of UNSC Resolution 1244.

"This resolution does not allow the existence of any armed formations in Kosovo other than the contingency of the United Nations. We share the concern of Serbia because we know that such moves lead to instability in the Balkans. Our support will continue," he said.

Asked about the frequent talk about Russia's mediation in the Kosovo dialogue and whether that could occur, Putin said that Russia has always actively participated, but, he noted, the EU is the mediator.

"The EU is the mediator, but it is not achieving much," he remarked, adding that what has been agreed so far is not being implemented and, in that context, particularly emphasized the fact that the Community of Serb Municipalities (ZSO) in Kosovo has not yet been formed.

The Russian leader also recalled that UNSC Resolution 1244 provides for a certain number of Serbian police officers and border guards to be in the territory of Kosovo.

"Where are they?," Putin asked, and pointed out that international law must be much more respected.

He said that Russia is ready to cooperate with everyone, but that it is important and that international law is respected and that a solution just solution is found.

According to him, some solutions reached earlier seemed to have been intended to divide the Serb people.

"We need to convince our partners that if we want peace in the Balkans, we have to find a compromise and maintain it," Putin concluded.

Vucic addressed reporters to remark that he today had the honor of hosting a sincere and proven friend of Serbia.

Apparently referring to the Kosovo problem, he said that he told the Russian leader that Serbia is always ready for talks and compromises, but that he could not and would not agree to his country being humiliated.

Vucic also said that he and Putin achieved a high degree of agreement "on all issues" today.

He thanked Russia for supporting Serbia's integrity and independence, and said that he was very pleased with the progress of their cooperation in all areas.

Vucic also told journalists that he informed his Russian colleague about everything that has been happening lately around the issue of Kosovo and Metohija - the unlawful taxes imposed by Albanian authorities in Pristina, as well as the establishment of the so-called "Kosovo Army" - contrary to UN Security Council Resolution 1244.

"It seems to me that we have received significant support from President Putin in that regard," Vucic underlined.

The Serbian president added that, "without Russia, there will not be any kind of solution to the Kosovo issue."

"Before any solution, I will consult with Putin," Vucic emphasized.