Ivica Dacic met on Monday on the sidelines of the 13th Pacific Alliance Summit in Mexico with Chile's Minister of Foreign Affairs Roberto Ampuero Espinoza. 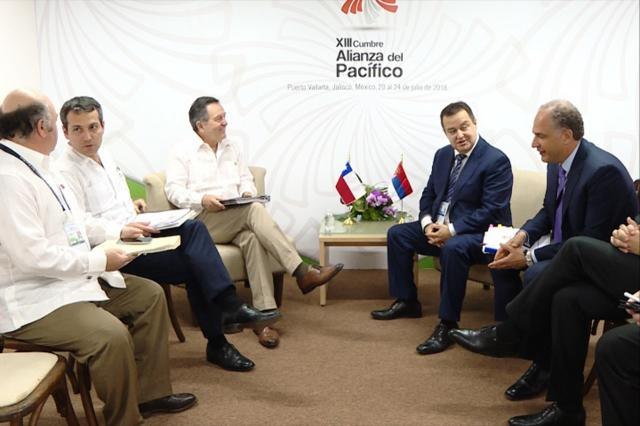 Dacic (R) is seen during the meeting with Roberto Ampuero (Tanjug)

The officials gave a positive assessment of the current bilateral cooperation and agreed that the potential for their further development, primarily in the field of economic cooperation, is very high, the Serbian government announced.

Serbia's foreign minister and first deputy PM "expressed the gratitude to Espinoza for the principled position of Chile in respecting the principles of territorial integrity and international law, as well as on the persistent and firm standpoint of not recognizing the unilaterally declared independence of Kosovo."

The ministers "exchanged views on the most important foreign policy challenges that both countries are facing, as well as on the importance and benefits of the associated membership of the Republic of Serbia to the Pacific Alliance – a regional platform, primarily oriented towards the improvement of economic cooperation."

Dacic today also met with Foreign Minister of Peru Nestor Popolizio Bardales, and "noted the need to work on strengthening bilateral ties in all areas of common interest," the Serbian government announced.

The officials "agreed that the very good cooperation between Serbia and Peru in the past confirms the existence of potential for the development of bilateral cooperation" while Dacic "presented the process of reforms implemented by the government of Serbia, and the officials also discussed the most important foreign policy issues."

Dacic is attending the summit in Puerto Vallarta at the invitation of Secretary of Foreign Affairs of Mexico Luis Videgaray Caso and Secretary of Economy Ildefonso Guajardo Villarreal.