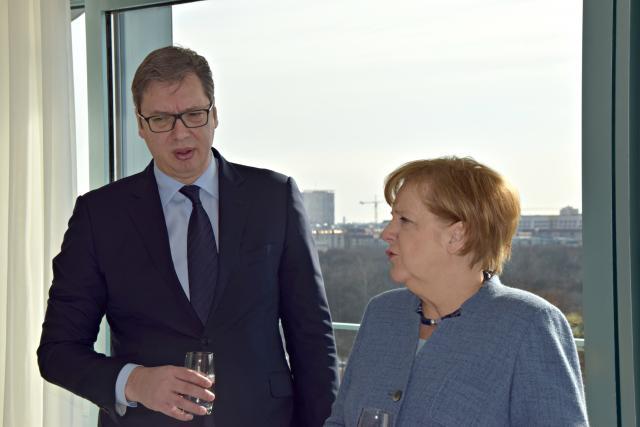 Speaking in Berlin, Vucic said that a "difficult" road to the EU lies ahead of Serbia, that much has to be done when it comes to (accession negotiations) chapters dealing with the rule of law, but also when it comes to relations with Pristina.

"I told her that it is more important to love the land of one's children than of one's ancestors. Serbia is ready for a solution, but the solution is in both sides losing something," he said.

According to him, "it may be better if nobody is satisfied" - because there are "many difficult solutions, while for Serbia the only difficult one is that where Serbia is the only loser."

"We know what difficult tasks are ahead of Serbia, I am grateful to Merkel for the support... We believe in compromise, not in unilateral solutions, we believe that Germany's support, which will be even more powerful under Angela Merkel's leadership, will find solutions," Vucic said.

After her meeting with the Serbian president, the German chancellor said that "EU accession negotiations "can be successful with further reforms in the domain of the rule of law and in the light of the issue of relations with Kosovo."

"We are impressed with the way Serbia continues on the path of progress in the fight against corruption and we encourage Serbia to continue that way," said she told a joint press conference with Vucic.

She reiterated that her country supports Serbia, and added:

"Accession negotiations can be successful if reforms develop further in the domain of the rule of law and in the light of the issue of relations with Kosovo. That is why we partly touched on how we can reach a legal framework, a contractual solution for Kosovo," Merkel said.

She added that a number of issues in the region need to be resolved, and stressed that Berlin "appreciates President Vucic's participation when it comes to cooperation among the countries of the Western Balkans".

Vucic said he was happy because of Germany's political influence, and because of increased trade between the two countries.

He then recalled the role of the German chancellor in 2015 when Croatia imposed sanctions on Serbia at the height of the migrant crisis.

On the other hand, Merkel said that she does not prescribe what has to be done about Kosovo.

"The president of Serbia is the main actor there," Merkel said.

Asked whether a legally binding agreement would mean "Serbia's recognition of Kosovo," the German chancellor said that as far as expectations concerning Kosovo, she was "the one that will prescribe what has to happen and what is the desirable thing to do."

"The initiative starts from Serbia, the president of Serbia is the main actor. We talk about it and we support things when our support is sought. But I will not be dispensing advice, especially not in the public," Merkel said.