"War of humanitarian statuses": Govt. must decide on RSHC

The Serbian government will soon discuss the Russian-Serbian Humanitarian Center (RSHC) and the status of its staff. 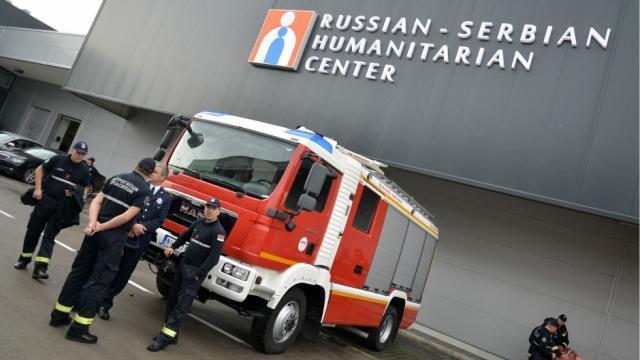 "It's really no longer either normal, nor do I understand why they (the US) are opposed to giving immunity to Russian humanitarian workers in the Nis Center," First Deputy Prime Minister and Foreign Minister Ivica Dacic has told Vecernje Novosti.

He also announced that this issue will soon be on the government's agenda.

The newspaper said it learned that consultations on this topic, between members of a ministerial team and President Aleksandar Vucic, will be held in the coming days.

The RSHC staff status issue has come into focus once again after Director of the European Border and Coast Guard Agency Frontex Fabrice Leggeri said that the agency's liaison officer in Belgrade will enjoy diplomatic immunity.

Dacic confirmed this, and explained that it is common practice - and that this kind of privilege is enjoyed, among others, by representatives of the International Red Cross.

However, according to unofficial information obtained by Vecernje Novosti - Frontex had previously sought diplomatic status for all of its officers who could be deployed in border control in the territory of Serbia, due to the migrant crisis.

Frontex thought it was crucial that their border guards could enter Serbia without a visa and enjoy full immunity. This request coming from the EU, which Belgrade at the time refused, was interpreted partly as a response to the possibility that Russian rescue workers could receive immunity.

Although status of representatives of certain foreign and international organizations is largely resolved through established diplomatic practice, in Serbia, it has been raised to the level of a first-class political issue - because of the opposition of Western countries to granting diplomatic immunity to employees of the Center in Nis.

Particularly loud at this recently has been the US embassy, whose representatives recently visited the RSHC and then said they saw no reason for special status to be granted to Russian rescuers.

The issue has been awaiting a solution for three years, since a draft agreement was harmonized with the Russian side.

This proposal implies immunity, inviolability of documents and correspondence, and protection of private accommodations in the same way as the premises of the mission.

If they were to receive the required status, the Center's employees would not be under obligation to testify before domestic courts and would be exempted from taxes, duties and customs on personal use items.