"NATO would solve problems - but people don't want it"

Aleksandar Vucic says that "by joining NATO" Serbia would "solve a large portion of its problems." 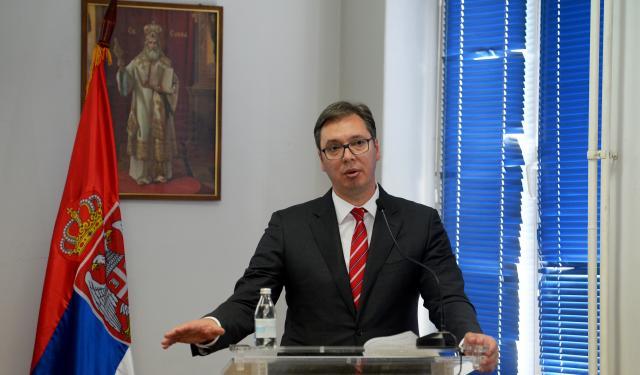 However, continued the prime minister and president-elect - membership in the organization would go against the will of "75 percent of the nation."

Likewise, "those 70 percent who want us to be with the Russian Federation" should consider "where our market is, and that one must live on something," Vucic said during a lecture he gave on Monday at the Faculty of Security in Belgrade.

He stressed that, in this regard, Serbia's goal was to "maintain its military neutrality, join the EU, but also to have best possible relations with Russia and China."

"So far we have succeeded in that. We have the statements and the recognition both by (Russian President Vladimir) Putin and (Russian Deputy PM Dmitry) Rogozin that Serbia and Russia have never had better relations. From the US and the EU, they are saying that we have never had better cooperation, to say nothing of our relations with China," said Vucic.

According to him, the 21st century "is not a century without conflicts" - and while there are many unresolved problems and issues - globally, the circumstances are not the same as 20 years ago, when there was one dominant military, political and economic power.

He clarified that "today the task of German and other diplomats is to represent Europe" as a global economic and political power - but the moment will come to develop (EC President) Juncker' idea about ​​creating a European army."

"Europe, with Germany at its helm, counts on weapons and armaments never having the crucial importance, but rather the moral aspect on which Germany and Europe insist," he said.

In addition to these four "countries" there are, as Vucic said, other "strong individual countries" such as Japan, India, and Britain, "which is close to the United States."

"It seems that a fierce battle lies ahead in Africa, where three of the four powers are battling for dominance: China, Europe and America," Vucic said.

After Brexit, he said, "Europe is imposing itself ever more clearly as a world power."

"There is insistence that it is not known who the boss of Europe is, although it is clear who the boss is," said Vucic.