Thaci on the way to The Hague VIDEO 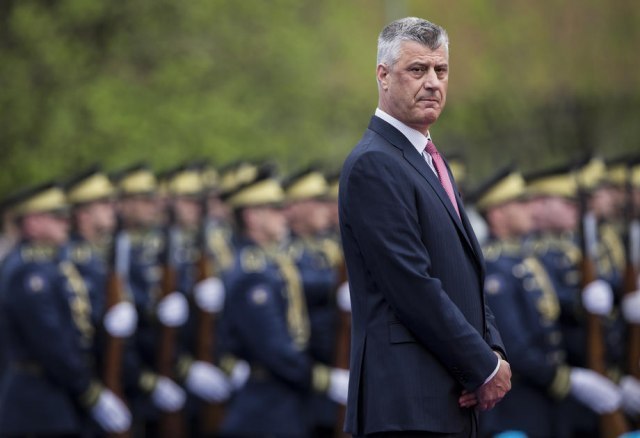 They flew a military plane to The Hague.

They were accompanied to the airport by Kosovo police vehicles.

The President of the Interim Institutions in Pristina, Hashim Thaci, went to the EULEX headquarters earlier today after his resignation.

Thaci arrived at the EULEX headquarters in a private car. Then the car went with Becim Colaku, who was the head of Thaci's cabinet.

Kadri Veseli is also in the premises of that mission, who announced earlier today that an indictment had been filed against him as well, the reporter of the television Prva from Kosovo and Metohija informs.

As it is stated, there is a special plane at the military airport in Pristina, which will send three former KLA leaders to The Hague, Thaci, Veseli and Rexhep Selimi.

According to the reporter, the court has 116 witnesses to the crime.

The special court in The Hague confirmed the indictment against Hashim Thaci, and he announced that today at a press conference.

According to the reporter of TV Prva from Pristina, that address was unusual and Thaci even seemed sad.

"In order to protect the integrity of Kosovo, respecting the partnership with the international community, I am resigning as president today. I feel very proud of the responsibility I have borne. In these new circumstances, I call on political forces to be careful not to deepen the institutional crisis," Thaci concluded.

As a reminder, the indictment against Thaci, Veseli and nine members of the KLA was submitted by the Specialized Prosecutor's Office to the Specialized Chambers of Kosovo on April 24, and the six-month deadline for its confirmation expired on October 24.

The decision to confirm the indictment was to be made by the pre-trial judge, so that he either confirmed it or returned it to the prosecution for supplementation or rejected it.

Thaci, Veseli and other suspects are charged in April with war crimes in Kosovo, including nearly 100 murders. The victims of the criminal acts from the indictment are hundreds of persons whose identities are known, among whom are Kosovo Albanians, Serbs, Roma and persons of other nationalities, as well as political opponents, the Specialized Prosecutor's Office announced earlier.

The special court in The Hague confirmed the indictment against Kadri Veseli.

"Yesterday afternoon, the Prosecutor's Office informed me that the pre-trial judge had confirmed the indictment against me. With this statement, I want to inform the citizens of Kosovo that I have taken the necessary measures for a voluntary trip to The Hague to respond to these allegations. I will not comment further", Kadri Veseli stated.

Kadri Veseli, who was the head of the secret information service of the former so-called Kosovo Liberation Army, announced that he would surrender to the Court in The Hague.

The KLA secretary made a statement

Secretary of the so-called KLA's Veteran Organization Faton Klinaku stated today that the files submitted to them contained an indictment against Kadri Veseli, as well as that the files that, as he says, were sent from Serbia, contain the names of the entire leading structure of the KLA.

He assessed that the actions of the Special Court are illegal, because its mandate has expired, Pristina's Ekonomija online reports.

"We believe that the mandate of this court expired on August 3, and any action it takes is illegal and unconstitutional. The files we had contained pre-indictments for most KLA command structures," Klinaku said.

On Wednesday, EULEX members broke into the house of Krasniqi, who was arrested after a 10-hour search, and the indictment was confirmed by Rexhep Selimi, who said that he would travel to The Hague today.