Serbian and Russian presidents Aleksandar Vucic and Vladimir Putin and Israeli PM Benjamin Netanyahu laid wreaths at the Tomb of the Unknown Soldier in Moscow. 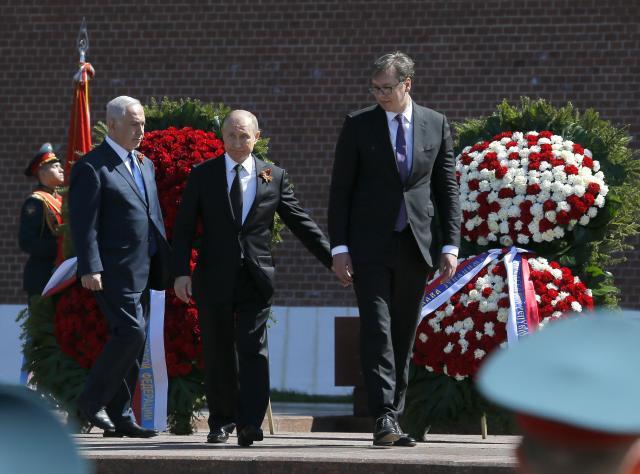 The three leaders previously attended the Victory Day military parade in the Russian capital, organized every year on May 9 to mark victory over fascism in the Second World War.

The ceremony at the Kremlin Wall included the sounding of the national anthems of the three nations. Putin, Vucic, and Netanyahu also placed flowers at the memorials dedicated to Russia's Hero Cities.

They will also attend a reception at the Grand Kremlin Palace later in the day.

Speaking to reporters earlier, Vucic said Putin had invited him to take part in the Immortal Regiment march in Moscow on Wednesday - an event that gathers hundreds of thousands of people who carry portraits of their family members who fought in the Great Patriotic War.

Vucic, who on Tuesday evening met with Putin, said he would participate and carry a photograph of his grandfather Andjelko Vucic, who was killed by the Ustashas - members of the regime of the Independent State of Croatia (NDH), a WW2-era fascist entity.

"My parents found a photograph of my late grandfather who was killed by the Ustashas, so I will walk beside President Putin to show that we want to preserve the memory of those killed by fascism in those difficult times, and with the desire that those times never repeat," Vucic stressed.

Putin this year once again carried a photograph of his father.