Kurti does not give up: "From September 1"

Albin Kurti responded to allegations that he is delaying the implementation of decisions on license plates and reciprocity of identity cards with Belgrade. 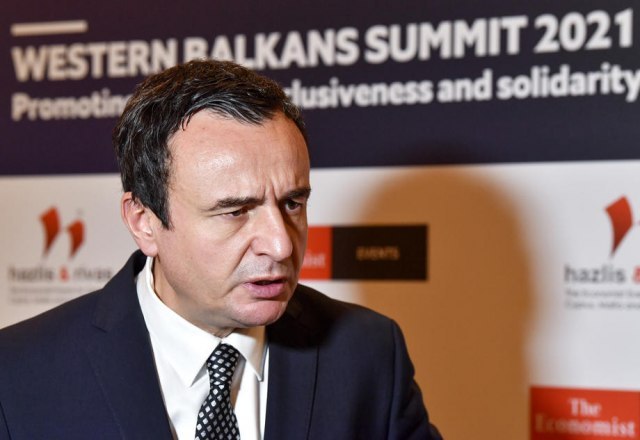 Prime Minister of the so-called Kosovo Albin Kurti responded to allegations that he is delaying the implementation of decisions on license plates and reciprocity of identity cards with Belgrade.

He pointed out that they've been waiting for the implementation of these decisions for 11 years, and now a one-month delay seems to be a problem, reports Koha.

Kurti repeated that Belgrade developed a "wild disinformation campaign" and that this was the main reason why he postponed the implementation of two Government decisions.

"What should have happened 11 years ago, we are now starting to implement. We waited 11 years, what's the rush now that we cannot wait even less than a month. Due to the large disinformation campaign carried out by Belgrade, we agreed with international factors to postpone the implementation of the decision until September. We have done a lot, but a wild campaign has started from Belgrade. With work and commitment, we will finish everything well. We are dedicated to what we are doing. In the circumstances we are in, we have made the best possible decision. Better on September 1st than never. And it would be even better if it was implemented back in 2011, when the agreement was reached in Brussels," said Kurti in the Parliament.

Kurti pointed out that the decision on license plates and identity cards was coordinated with international partners.

"These decisions will also transform the changing of the license plate from the time of Milošević time. In addition, there must be identification for citizens entering Kosovo, the same is the case in Serbia for citizens of Kosovo. We have issued more than 2.000 documents. We have accepted the proposal of the international community that this decision be postponed because of disinformation from Serbia," Kosovo Prime Minister emphasized.

He stated that Kosovo is determined to continue implementing the decision on reciprocal measures from September 1.

"There was talk of the horror that would befall the Serbs in the north, who managed to erect nine barricades in a short time. With work and commitment, we finished it well. Only a year ago, when the citizens of Kosovo wanted to enter Serbia, they had to pay five euros, and now they don't pay anymore. Maybe there will be tension in the future, but we are determined to move forward and have the support of the international community. We saw that on July 31, Serbian parallel structures are able to cause conflicts," Kurti added.

Responding to the name-calling of ABK leader Ramush Haradinaj, Kurti pointed out that four years ago, the vice-president of the Serbian List, Milan Radoičić, sat in his cabinet.

"There has never been more of a fight against crime and corruption in the north than now. Four years ago, the main criminal, he was in the Prime Minister's office, and today he is wanted and is on the black list of the USA. He came to the north because of the video, and now he is in Serbia. This is a big difference. Don't sell patriotism and morality because we know you well," Kurti said to Haradinaj.