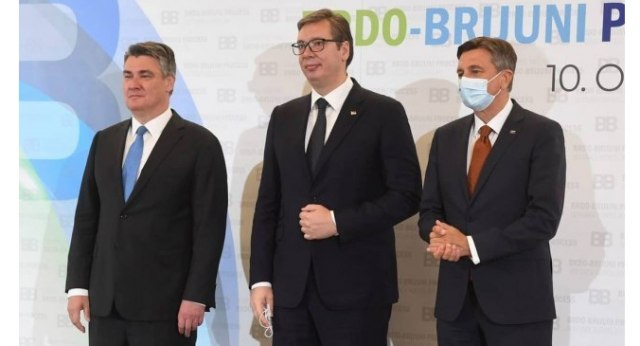 He addressed the press after the session at the Brdo-Brioni Summit.

"We have supported the intentions of others to open a date for negotiations," he said.

"Serbia has always been committed to not changing the borders," Vucic said.

He stated that the initiative of Serbia was not accepted. "Borders should not be changed, in accordance with the rules established by the United Nations," he noted. As he said, the borders for Serbia do not change, except for those accepted by the UN.

"Borders are mentioned, which should be erased due to the flow of goods and people," Vucic said.

"It wasn't tumultuous, I've enjoyed it"

"I am satisfied that the majority was able to agree, with the exception of the representative of Pristina," he said.

He added that everyone knows the positions of the countries in the region on the issue of Kosovo's independence, but that there are no open and inconsistent positions on other issues. "They would like to interpret the borders as they like, and not as interpreted by international law and the UN, and we have tried to find a compromise accordingly," he said.

As he mentioned, he was not upset at the meeting, but enjoyed it. "I am satisfied that Dzaferovic said what he thinks, we said what we think," he said. As he said, Dzaferovic had "six points against Serbia and six against Croatia", to which Vucic replied that they did not make sense.

"Albanians did not want to talk about the UN at any cost, we cannot talk about it differently, it is absolutely impossible," Vucic underlined.

When asked by journalists what his relations are with the President of Croatia, Zoran Milanović, Vučić said that he has decent relations with him.

"We know what his views are, he knows what our views are, there is nothing to add or subtract. We want good relations with Croatia, we don't think we have to flatter anyone in Croatia or that anyone from Croatia should flatter us", said Vučić.

He said that over time, relations with Croatia will be better and that we will succeed in building them together, when we show greater respect for each other.

"I have no objections to his co-presidency today," Vucic said.

Speaking about Serbia's entry into the EU, Vučić said that, even if Serbia fulfilled everything, it would not be in the EU again.

"The real situation is such that there is fatigue from enlargement," he noted.

He said that it was important for Serbia to implement reforms for its own sake, in order to grow as fast as possible.

When asked about the continuation of the dialogue with Pristina, Vucic said that a will for compromise is needed.

"If you come and say: it must be as I say, it will not be possible. It must be talked about, not ordered," he said.

On the occasion of today's summit, Vučić said on Friday that he had received a proposal for conclusions that should be adopted today, and possibly a declaration on the immutability of borders in the Western Balkans.

According to him, those conclusions state that all participants oppose the change of borders, and as the President of Serbia stated, he introduced a small amendment, which now made "hell for them". "I just put the opposition to the change of borders in accordance with the United Nations Charter," Vucic said on Friday.

After the Summit, Vučić travels to Brussels.