President of Serbia, Aleksandar Vučić, presents decorations to deserving individuals and institutions in the fight against COVID-19 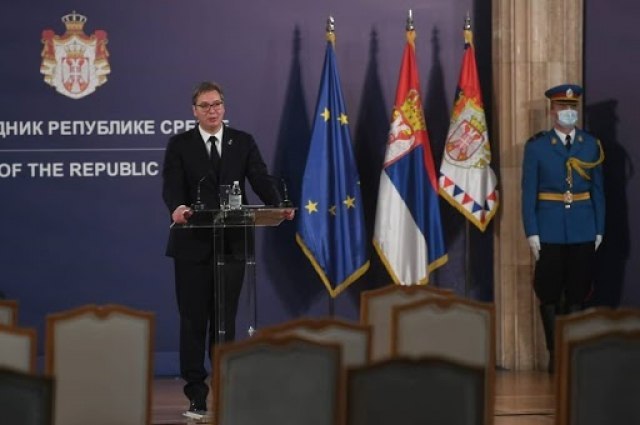 "I want to congratulate everyone on the great holiday. We are marking the time of Serbian tragedy and magnificent victories," Vucic said at the award ceremony.

He thanked those who gave everything they had, but also those who work and fight today.

Vučić said that today it is impossible to repay the debt to all laureates, and that he is immensely grateful to them for everything they have done for the country.

"I often wonder how you managed to find that strength in yourself, how you could quietly, without whining, provide our citizens with everything they needed. You could do that because you are honorable people, whose ethics deserve to serve as an example," Vucic said.

According to him, with the decrees, as the president of RS, he tried to thank them at least in part for the enormous energy they invested in fighting "not caring for their lives".

"I thought it was important that before the decorations at Sretenje, I show them the honor by receiving decorations for the deeds they did," he added.

President Vučić thanked epidemiologist Predrag Kon for his great support and daily help to the country in the fight against coronavirus.

"I want to thank you, Dr Kon, and say that I know that it was not easy or simple. I know you knew you were doing the hardest job in a country where everyone criticizes everyone... When you say something is beautiful, everyone will say it's ugly, it is always like that. Few people want show respect to those who know more", Vucic said.

He also expressed gratitude to the Russian painter and iconographer Nikolai Aleksandrovich Mukhin, saying that he is one of the people who is most deserving for the painting of the Temple of Saint Sava.

There are also Brigadier General Jelesije Radivojevic and Colonel Radivoje Andjelkovic, the commander of the temporary hospitals "Belgrade Fair" and "Arena".

The award will also be presented to the Prime Minister of Luxembourg, Xavier Bethel, and the painter Nikolaj Muhin, who painted the Temple of Saint Sava.