Vucic: "This day brought out worst in Serbian society" VIDEO 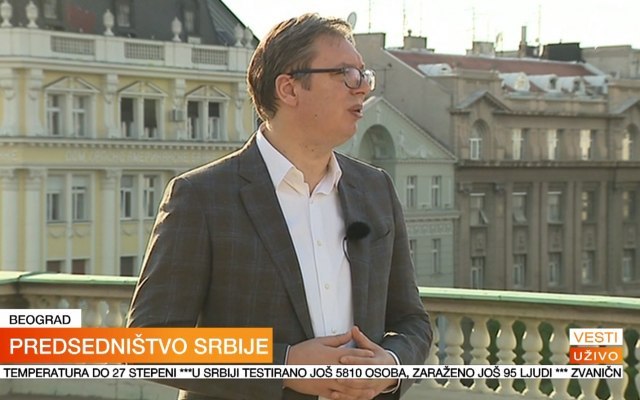 "Today is the day for all the worst in our society. We allow everyone to exercise their right", President said.

The goal of the state is to preserve its legal order, but also to be one of the most successful European countries again, two months after its closure.

"The state must clearly set the limits" he says.

He adds that it is important for the whole society to condemn what happened today in front of the Assembly.

"It has never happened that the mob in front of the assembly beats MPs," Vucic added.

According to him, it is best to solve that through the institutions of the system.

He adds that the part of the opposition that is boycotting elections will eventually participate in them.

"It was never a matter of conditions, but of not having the support of the people. Those are political calculations."

According to him, the most important thing is to think about what can be done in the field of economy.

"When you have a stronger economy, your political position is stronger," he said.

He calls on the citizens, regardless of for who they will vote, to all oppose violence and preserve our values, and then we can have different opinions.

"I speak as the president of the country. I am the president for another year and a half. I did not say I won't, but I would like not to run for the next elections," he says.

When asked if Bosko Obradovic was also arrested, he answered:

"You can arrest an MP only if you catch him committing an act for which a sentence of more than five years is envisaged," he says.

He says that Serbia is not polarized, but that we have a bunch of extremists on one side.

"They think they have the right to govern Serbia and be in power. If they are not in a ruling party, it is difficult for those who are," he explains. He believes that after today's incident, every citizen felt ashamed.

He says the election has been postponed to save lives. Now we have another 45 days, but according to the president, that is not enough for some.

Research shows that there will be a tough fight during the election campaign.

"It's going to be highly uncertain," he says.