Serbian Orthodox Patriarch Irinej will not apologize to Montenegro for what he said about the position of the Serb people and their Church in that country. 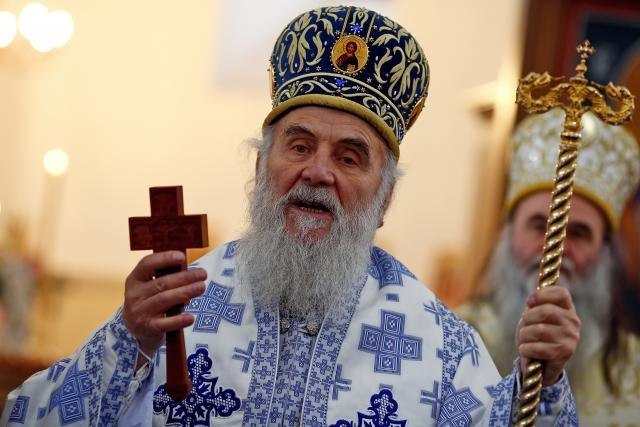 Vecernje Novosti is reporting this on Wednesday, after a storm caused by the patriarch's claim that the status of Serbs in Montenegro is comparable to what it was in the Independent State of Croatia (NDH) - a WW2-era Nazi allied entity that had death camps for Serbs, Jews, and Roma.

The statement obtained by the newspaper at the Patriarchate in Belgrade on Tuesday was also a reply to Montenegrin President Milo Djukanovic, who publicly called on the patriarch to refute his own words.

Unofficially, it has been clarified at the Serbian Orthodox Church (SPC) headquarters that the SPC leader wished to emphasize the discrimination of Serbs and of SPC's Montenegrin Metropolitanate, "that was officially being carried out by the Montenegrin state."

The greatest controversy has been caused by the patriarch's response to a question made by the Podgorica-based daily Dan, asking him to "compare the position of Serbs in Montenegro with an historical epoch."

"I would compare it with the position of Serbs in Croatia during the time of the NDH. The hostility in Montenegro is not like that of the Ustashas (the NDH regime), ​​but there is hatred among the people. It is certain that it's done by those who don't wish well to either Serbia or Montenegro," said Irinej.

The Montenegrin prime minister also reacted to this statement, accusing the patriarch of "abusing the hospitality of Montenegro," and linking it to the opposition of the Church to Montenegro's membership in NATO.

On the other hand, historian Aleksandar Rakovic from the Institute for Serbia's Recent History, pointed out in a statement for Vecernje Novosti that Patriarch Irinej "made no mistake when he compared the position of the Church and the people (in Montenegro) to the NDH."

"In Montenegro, there is a continuation of the 'Pravas' process, which was founded by Ante Starcevic. Unlike during the time of the principality and the kingdom, today's Montenegro is based on an anti-Serb idea," Rakovic claims, and recalls that Djukanovic speaks today about "the return of Montenegro to the Western world" in almost the same way as Sekula Drljevic - a fascist collaborator - did in 1941.

"The patriarch does not need to apologize to the president of Montenegro. Djukanovic should apologize to him because of the historical betrayal of the Serb people," Rakovic said.