FM: Serbia has largest number of refugees and IDPs in Europe

There is absolutely no alternative to working together, First Deputy PM and Foreign Minister Ivica Dacic has told the OSCE Mediterranean Conference. 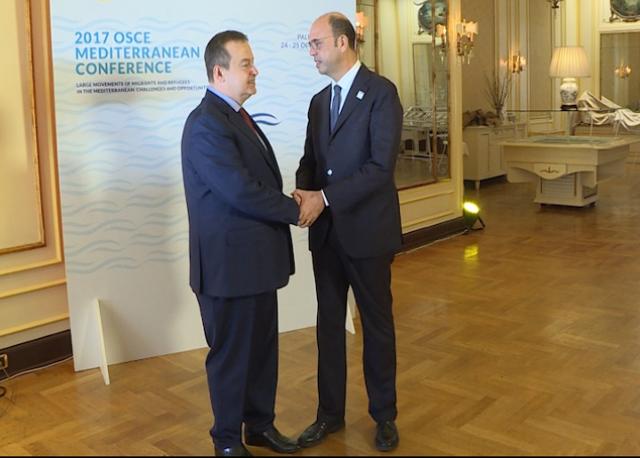 The current refugee and migrant situation calls for unabated attention, efficiency and, above all, solidarity of all relevant actors, Dacic said as he addressed the gathering in Palermo, Italy.

This means not only providing emergency humanitarian assistance to refugees and migrants in the current crisis, but also seeking and finding durable solutions for persons in protracted displacement, he added.

"There is no doubt that dealing with this major issue requires awareness of the root causes underlying the movement of population, such as the conflict in Syria and the overall fragile situation in the Middle East region, the series of conflicts in Africa, coupled with poverty, hopelessness and political instability in many developing countries across the globe," Dacic said.

The minister stressed that he "firmly believes that a comprehensive solution should be found both on the European, as well as the global level, since this is not a problem within geographic confines but a phenomenon of global scale, unprecedented in the post-World War II period."

"We must not lose sight of the fact that the huge influx of refugees and migrants to the countries of Europe, within a short space of time, has made the local communities along the migration route incapable of quickly absorbing this inflow, giving at the same time rise to increased xenophobia and resentment of migrants in many countries," Dacic said.

The Serbian minister underlined that since mid-2015, Serbia has been in the very center of the so-called Western Balkans migration route transited by most migrants on their way from Syria, Afghanistan, Iraq and other turbulent regions to the countries of Western and Northern Europe.

He recalled that the Western Balkans route was officially closed in March 2016, after an agreement had been reached at the EU – Turkey Summit.

According to him, the number of persons in transit was significantly reduced, resulting in their lengthier stays in the territory of transiting countries, including Serbia – thus acting as a significant burden on the available capacities.

"Over the past two years more than 900,000 refugees and migrants transited through Serbia. We have demonstrated our solidarity and humanity, for which Serbia frequently receives praise from migrants themselves, but also from the international community," Dacic said and stressed:

"Our empathy for refugees and migrants and essential understanding of their suffering and predicament stems from the fact that we have been faced with the problem of refugees and IDPs for more than two decades."

According to the UNHCR data, the minister continued, our country is even today home to a total of 250,000 refugees and IDPs living in protracted displacement, the largest number in Europe.

"The reduction in the number of refugees in the territory of the former Yugoslavia was largely the result of their integration in the Republic of Serbia, which bore the largest burden of a durable solution for the refugee problem. Regrettably, out of 200,000 IDPs from Kosovo and Metohija, only 4,000 of them or 1.9 percent have returned to their homes," Dacic said.

Underlining that there was "absolutely no alternative to working together," he pointed out that "dealing with the complex challenges that we are facing will only be successful if we join our efforts and manage to act with full respect to the basic values, principles and commitments of the OSCE."

The magnitude and complexity of the challenges faced by the Euro-Mediterranean region cannot be addressed by a single state or organization on its own, the minister warned.

"We must jointly develop comprehensive, humane, and sustainable solutions thus providing for basic human dignity and protection needs of refugees and safeguarding the human rights of all, but at the same time, guaranteeing security of the recipient countries," Dacic said.

"It is of utmost importance to promote coherent regional approaches to the complex and divisive issue of migration, thus paving the way towards shared concepts, common policies and coordinated action," the minister said.

Dacic concluded his address by saying that wished to "emphasize once again that the Republic of Serbia remains committed to pursuing and strengthening cooperation with Mediterranean partners, including through the OSCE, wherever the organization can be of assistance with its comprehensive approach to security."