"If Serbs are killed, we'll send army to Kosovo" - president

Serbian President Tomislav Nikolic warned on Sunday that "any new attempt by Pristina to cause a conflict" would "end badly." 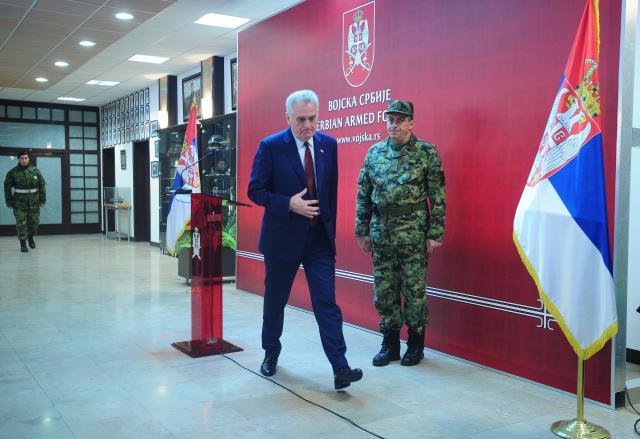 Nikolic is seen at the General Staff on Sunday (Tanjug)

The president made this statement after a meeting of the Council for National Security, held in Belgrade.

The meeting was held a day after the incidents in Kosovo over a train traveling from Belgrade to Kosovska Mitrovica - reestablishing the direct line for the first time in 18 years - and the tension at administrative line crossings between Kosovo and central Serbia that ensued.

"Let Albanians and their sponsors think about that. We will act in line with the Constitution of Serbia. Kosovo and Metohija is, under international law, a part of Serbia," the president said.

According to him, "Saturday was a day at the brink of conflict, although Belgrade made an effort not to show it."

"The appearance of (Pristina's) ROSU units (in northern Kosovo) was a sign that (Kosovo) Albanians want war," Nikolic said.

The president stressed that he expected the EU to say whether Kosovo PM Isa Mustafa's statement that Brussels "agreed with each move made by Pristina" was true.

The president also described Pristina's behavior during Saturday's incidents as "the outgoing U.S. administration's throes," and that one of the topics of the Belgrade-Pristina dialogue going forward will have to be "the train, i.e., the freedom of movement."

Nikolic then said that "under the circumstances of a challenge such as the one yesterday (Saturday)," he and PM Aleksandar Vucic "decided to stop a passenger train that proved to be such a problem for the EU, the U.S., and the interim institutions in Pristina."

"Everything was on the brink of conflict that would have produced dozens of deaths, and today... God knows... yesterday several agreements signed in Brussels were trampled on, Article 1 speaks about the freedom of movement, and there's also the article that says special ROSU units cannot show up north of the Ibar (River) without the approval of NATO and the local community. Why did a train bother the so-called international community and Pristina yesterday? Perhaps because it had 'Kosovo is Serbia' written on it and because it was painted with our frescoes... then we should not allow any Albanian carrying the insignia and the documents of Kosovo through the territory of Serbia," Nikolic said.

He stressed that neither the EU nor NATO "provided the right response."

"We will never start and cause a conflict, but permit us, we are a state that must protect its people and its territory. Kosovo is a territory under UN control, while the EU has a big role," Nikolic added.

"I am warning (Pristina) not to speak about conquering of territories, about their police being in a territory where they could not be, under any of the agreements. We do not want conflict, but there are situations and circumstances where one can no longer act according to one's wishes. We will act according to the Constitution of Serbia, which is clear. We are under obligation to secure every inch of the territory and each citizen. We have agreed on this, and we stand united, and let us not be provoked," the president said after the meeting of the Council held at the Serbian Army General Staff's headquarters, chaired by him and attended by Prime Minister Aleksandar Vucic, Deputy Prime Minister and Minister of the Interior Nebojsa Stefanovic, Minister of Defense Zoran Djordjevic, Minister of Justice Nela Kuburovic, Police Director Vladimir Rebic and the Chief of the General Staff of the Serbian Army, General Ljubisa Dikovic.

Everyone is united in the stance, he added - "the police, the army, the government, the security structures" - that the decision on Saturday was "good," while there is "no basis for the gloating of the Albanians."

"Any new attempt of theirs will end badly, and they and their sponsors should think about that," Nikolic said.

Responding to reporters' questions, the president said Serbia was ready to send its armed forces to Kosovo and Metohija if the Serb population in that province comes under threat.

"If Serbs are being killed, yes," Nikolic said, when asked whether Belgrade would make this move.

He reiterated that "Serbia doesn't want conflict" and "will not attack anyone - but has the constitutional obligation to protect its citizens."

Asked about the members of the ROSU unit showing up in northern Kosovo on Saturday, Nikolic said that Belgrade "received no explanation" and added:

"If NATO has not fulfilled its role, then, as far as I'm concerned, they're not needed in the territory of Kosovo and Metohija... then they should step aside and we'll solve our problems ourselves."

The president added there would be "no more (Kosovo) dialogue in Brussels until this has been cleared up."

"Europe," he said, "owes us many answers to many questions, and the Serbian government is completely prepared and united in seeking those answers."

"As long as I am president, I will make an effort not to go to war with anyone. If that's not possible, as commander-in-chief, I will take responsibility for each of my decisions. I'm telling you in advance: we don't want to go to war, we don't want war, and we are still treating this as small provocations. But, if (Kosovo President Hashim) Thaci is threatening he will go into (Kosovska) Mitrovica...," Nikolic said, without finishing the sentence.

Still responding to journalists' questions, he said he saw Isa Mustafa's statement that "everything that happened took place with the agreement of the West" as "making Serbia choose: 'either you'll accept everything that is asked of you, or you'll go to war'."

"Well, I'm that president who will not accept everything they are demanding," said Nikolic.

Vucic told an extraordinary press conference held at the Serbian government headquarters in Belgrade that "Albanians and their special forces tried to blow up a part of the railway during the day, and later in the day they sent a special unit from Luzane to Jarinje composed exclusively of Albanians, with rifles, with the aim of provoking a conflict."

The prime minister said that that unit was "to arrest train driver Milenko Stevanovic and passengers and to provoke clashes, which is why he made the decision to stop the train in (the town of) Raska."

According to Vucic, since the local Serbs gathered in Jarinje, Pristina sent 17 armored vehicles to the north of Kosovo with the aim of provoking a conflict.

"Serbia wants peace, I call on Serbs to remain calm, but my last warning and plea to the Albanians in Kosovo and Metohija is not to try to attack Serbs with weapons, because Serbia will not allow this," Vucic stated.

He stated that he informed EU High Representative for Foreign and Security Policy Federica Mogherini that he is disappointed with the reaction of the EU to these events, and announced that Russia will be informed during the evening that Pristina is "playing war games", and tomorrow China and the United States as well.

"A passenger train left for Kosovska Mitrovica, not a tank, but almost incredible things are happening," Vucic said.