FM Dacic: There is intent to destroy Serb entity by war

Ivica Dacic says a former Bosnian Muslim army commander's threats against the RS represent "the greatest threat to peace and stability in the region." 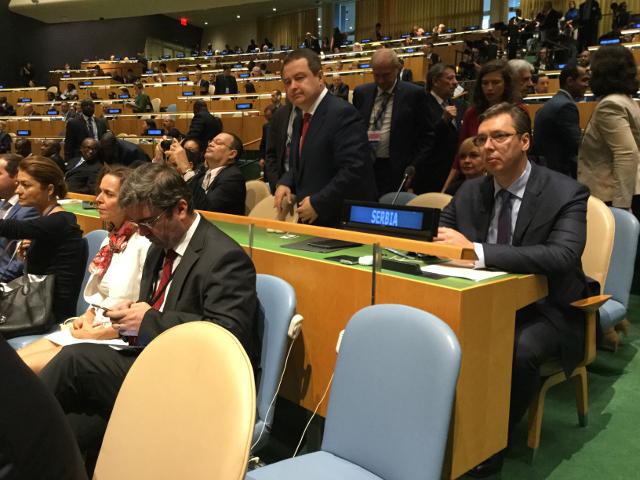 Vucic and Dacic are seen at the UN on Tuesday (Tanjug)

The Serbian foreign minister made these comments in New York on Tuesday, where he and Prime Minister Aleksandar Vucic are attending the UN General Assembly session.

Dacic added that Sefer Halilovic, who said the Serb Republic (RS) - the Serb entity in Bosnia-Herzegovina - would be attacked and destroyed if it holds the RS Day referendum, was not only a former Muslim wartime commander, but also "an unofficial spokesman for Bakir Izetbegovic" - the Bosniak (Muslim) politician and member of the country's tripartite presidency.

"Halilovic is saying what Izetbegovic is thinking. That is why his threats should be taken seriously, because they show that war plans exist based on the assessment that the RS could not withstand longer than 10-15 days, and that not even Serbia could defend it," Dacic said in a statement issued by his ministry, and added:

"It is clear to everyone that the referendum is merely an excuse, while behind everything is the intent to destroy the RS by war. If they wanted a compromise, the Constitutional Court (of Bosnia-Herzegovina) could have at least changed one comma in their decision (on the constitutionality of RS Day). But compromise was not important to them, instead an excuse for war intentions and plans, for which Muslims in Bosnia-Herzegovina are obviously preparing."

"Serbia undoubtedly wants peace and will do everything to preserve stability, but will certainly not allow a military attack and destruction of the Serb Republic. Nobody should even dream about that. Serbia is strong enough to defend itself and will not allow the destruction of the RS, either, if it comes under attack," Dacic said.

The Serbian minister added that his country "expects an urgent reaction from the international community and international representatives in Bosnia-Herzegovina, if they truly care for peace."

Serbia's state broadcaster RTS is reporting from New York on Tuesday that PM Vucic was "visibly concerned" today because of Halilovic's statements.

Tanjug earned from the Serbian delegation that Vucic was "not ruling out the possibility" he may return to the country earlier than planned, depending on the developments.

"We are not threatening anyone, but we will not let anyone take away a part of Bosnia-Herzegovina without calamity," Sefer Halilovic told the TV1 broadcaster earlier, in an interview during which he referred to the upcoming referendum in the RS on marking January 9 as that entity's Day as "a secession referendum."

Banja-Luka's Nezavisne Novine said he made threats of a conflict "during which the RS will disappear."

"After the referendum the Dayton Constitution will no longer be valid, then we will reinstate the Constitution of the Republic of Bosnia-Herzegovina, and after that God help us all, may he first give us reason and then the strength to bring that story to its end," said Halilovic.

He then appraised that the RS "could withstand ten to 15 days at most" in a possible conflict.

Asked "whether there were enough people on both sides in Bosnia-Herzegovina prepared to go to war," Halilovic replied: "Yes, absolutely."

"And that is why I am making an appeal to think things through well. Because, Milosevic has died, the JNA no longer exists, there aren't thousands of tanks, thousands of carriers... Serbia cannot help the RS. We will not let somebody secede with half of our state," said he.