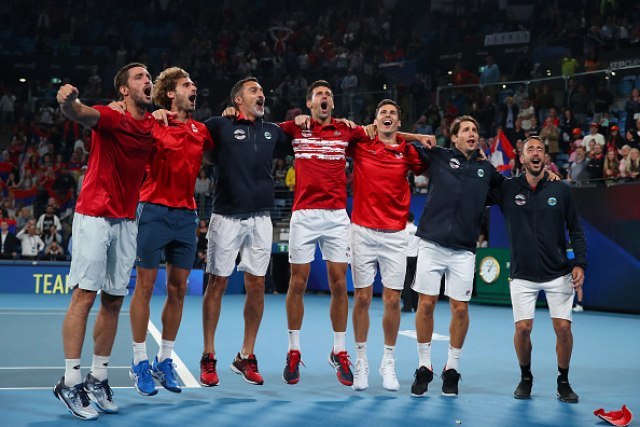 In the grand finale at the Ken Rosewall Arena, our team beat the Davis Cup champions Spain 2-1.

Serbia had won over South Africa (3-0), France (2-1) and Chile (2-1) on their way to the group stage finals in Brisbane, beat Canada (3-0) in the quarterfinals in Sydney, finally in the semifinals Russia, also 3-0.

Spain beat Georgia, Uruguay and Japan 3-0 in the group stage playing in Perth. In the quarterfinals in Sydney, they beat Belgium (2-1) and finally in the semifinals, host Australia by a maximum of 3-0.

Dusan Lajovic and Roberto Bautista Agut came first, the Spaniard celebrated 7: 5, 6: 1 after 97 minutes of play. It was his fourth victory in a fourth duel with Lajovic.

Two of the world's best tennis players, Novak Djokovic and Rafael Nadal, then took to the field. After an hour and 55 minutes of play, the Serbian tennis player triumphed with 6: 2, 7: 6 (4).

It was their 55th duel, Novak has three more wins, 29:26, and Nadal opted not to play doubles immediately prior to the start of the match.

It was an incredible nine days on the Australian continent during which Serbian tennis showed all the strength and top quality.

So, in a way, they continued where Nenad Zimonjic, Janko Tipsarevic and other members of the team then stopped in Dusseldorf in 2006, when they remained listed as the last champions of the World Tennis Cup, a competition that was the forerunner of this competition.

In this way, they added to the 2010 Davis Cup goblet, yet another big trophy for Serbian tennis.

After two fantastic singles matches, it was a draw, 1: 1, and the decision had to go down in a deciding doubles match.

Rafael Nadal gave up doubles play, Feliciano López replaced him, playing with Carreño Busta, and Novak and Viktor played as if enchanted, cheered by the numerous Serbian fans.

“I'll remember this experience for the rest of my life as definitely one of the nicest moments in my career,” Djokovic said. “I've been very fortunate and blessed to have an amazing career the last 15 years, but playing for the team, playing for the country with some of my best friends for a long long time, you can't match that. That's just too special.”

“I've never experienced an atmosphere like this on a tennis court... You carried us to victory and we owe you a big, big thanks,” Djokovic said. “We are part of an individual sport where we play by ourselves. But even when we were playing singles it never felt like it was only you out there. You always have a team in your corner giving you strength and focus. This was the highlight of the competition, along with the support of fans and the flags.”