BELGRADE -- President of Serbia, Aleksandar Vučić, said that at least two organized criminal groups were broken up and investigations into the murders were being conducted.

BELGRADE -- President of Serbia, Aleksandar Vučić, said that at least two organized criminal groups were broken up and investigations into the murders were being conducted. 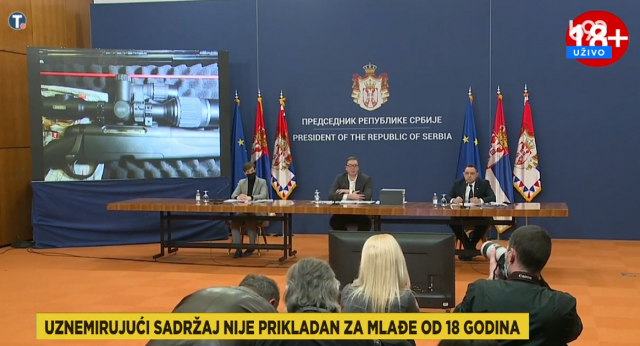 Vučić addressed the nation after the session of the National Security Council, which lasted for three hours and had several points.

Fourth, equipping, as well as strengthening the capacity of the Serbian Army.

At least two criminal groups were broken up

Serbia has managed to fight at least two criminal groups, he said, adding that "they will soon be disbanded and placed where they belong - behind bars."

He said that their days of freedom were numbered, and that the response of the state would be ruthless, but in accordance with the law.

Vučić stated that members of the clans had marked people from the State Security Agency (BIA) and other forces. "These people are heroes, they risked their lives," Vucic said.

He stated that there will be new information within 72 hours, because the devices that reveal new evidence have been borrowed.

He stated that they managed to find out about the members of the most famous group with the help of those devices, which he could not even dream about.

The members of the group in question had photos and marked persons in the BIA and Ministry of Interior, who were their enemies and "persecutors". "The days of freedom are numbered for all those who think that it is time to continue the "glorious deeds of their predecessors", and to poison children with narcotics, liquidate rivals in a monstrous way," he said.

He mentioned that some of them have been behind bars for three or four months, and thanked the citizens who believed that the state would be stronger than all criminal groups in our area, as well as members of the MUP, BiA.

Vučić and his family were wiretapped 1.572 times

The Minister of Internal Affairs, Aleksandar Vulin, said that the family members and the President of Serbia, Aleksandar Vučić, had been wiretapped 1.572 times. He said that polygraph examinations were performed on members of the MUP and that they all fell on them.

Vulin stated that people will not be able not to feel disgust, sadness and anger.

"You're done"; Shoots of victims are shown

Vučić said that the faces in the recordings were removed so that the identity would not be seen, but that the police knew him, and that they did not decide to show the recordings because they are scarier than photographs.

"We wanted to show what kind of psychopaths the state was dealing with. The war between Zvicer and Bojovic reached the scale that people were killed in a monstrous way," Vucic said. He stated that there will be investigations for the fifth, sixth and seventh murders. Between Loznica and Šabac, 21 long barrels were confiscated, of expensive workmanship, there are sniper rifles and very high-quality optical sights. “It’s the largest arsenal of weapons we’ve found,” he said. "What is our message - we are done with this gang, and to those who think they have inherited them, I say: you are done, and when I say that, I do not mean like when you say, I say that you will soon be behind bars. We will settle accounts with them, we will beat them, it will be in many cities across Serbia", he said.

Nebojsa Stefanovic was at the session

Vučić said that he does not divide people into whether they are in power or in opposition, and noted that "there are many people from power who are involved for some reason".

"People who work in the BIA must be professionals if they want to do that job," he said, adding that this has nothing to do with politics, but with respect for the law.

Vučić said that the Minister of Defense, Nebojsa Stefanović, was present at the session, although he was not present during the statements to the media.

"They will not be protected regardless of who they belong to, the prosecutor will do his job. 1.572 conversations are only documented, and who knows how many there were. Who knows what will be established there," he said.

"Vuletic should be ashamed"

Speaking about the former vice president of FC Partizan, Vladimir Vuletic, who resigned, the Minister of Internal Affairs, Aleksandar Vulin, said that he should be ashamed because of the interview in the media.

"Citizens will be able to see what his connections were with this organized clan," he said.

Please note that disturbing content is displayed during the address