"No mass testing procedure yet; Positives will be isolated - family members will not"

BELGRADE -- Epidemiologist Predrag Kon explained to TV Prva that we have conditions for mass testing presently, but that the system will be operational in about a week

"No mass testing procedure yet; Positives will be isolated - family members will not"

BELGRADE -- Epidemiologist Predrag Kon explained to TV Prva that we have conditions for mass testing presently, but that the system will be operational in about a week 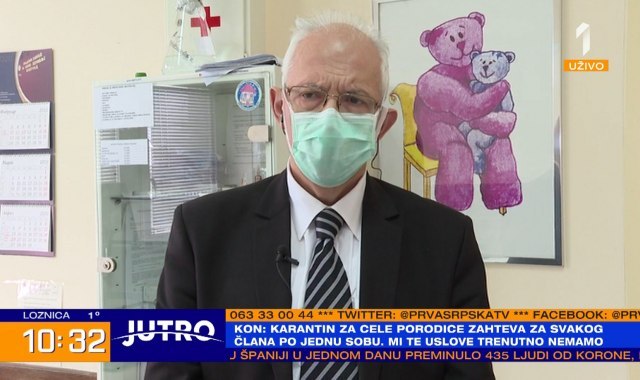 Chinese doctors have suggested this measure, and Kon says Serbia could not have gone in that direction before because conditions were not available.

"The direction we had was the one we were able to take, because of the means. We knew there was a possibility of mass testing, but we had neither tests nor a state of emergency. We have measures of social distancing now, so it is possible to move to more drastic measures of suppression", epidemiologist Kon told TV Prva.

"After all the measures taken, we move on to aggressively seeking new cases and suppressing the spread", Dr Kon says.

He explained that those who were coronavirus-positive would be singled out in specially adapted facilities to narrow down the testing capability and stressed that this was the most important.

He added that there was no capacity to isolate all members of the infected family.

"What our Chinese counterparts showed us stemmed from the fact that when they had self-isolation, it seemed to produce results, but that silent transmission happened - after returning to the family," Dr Kon explained.

All members of the families of those who came to Serbia should be tested, but, as Predrag Kon says, the number of people will depend on our capabilities, which means equipment and employees.

"Family members of those who have been ill have not been tested so far. So far, those with symptoms have been treated as a probable case, but now they will also be tested", he explained.

It is crucial, he says, that all contacts of an infected person be tested in the short term.

Dr Kon said that the exact testing procedure had not been worked out at the moment, but that it was technically impossible to go around the apartments. As well, it will take at least a week for the simultaneous functionality of mass testing.

"He who heals is 14 days after leaving the hospital will be in home self-isolation. Two findings need to be negative for the patient to be cured, so that's where the test capacity is needed," Kon said.

He explained that it was self-isolation, not quarantine, which is often equated by people.

"Quarantine is provided by both the police and the army and a ban on going out, so this is self-isolation", Kon concludes.