Although the whole world is calling for an immediate end of conflict in the Gaza Strip, Israeli Prime Minister Benjamin Netanyahu does not want to talk about it 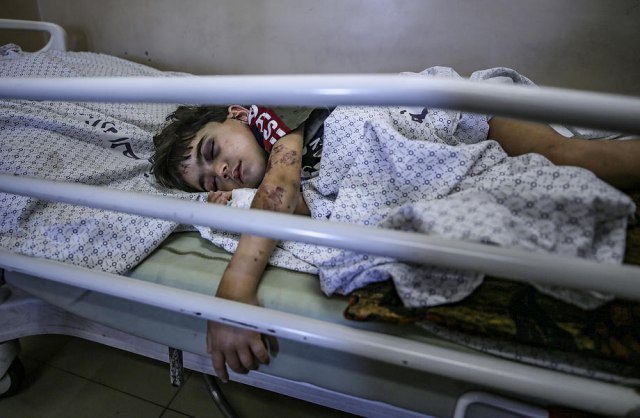 Since Hamas began firing rockets at Jerusalem in retaliation for police clashes with protesters at the Al-Aqsa Mosque, more than 3.000 rockets have been fired at Israel.

Israel, on the other hand, carried out more than a thousand air and artillery strikes on Gaza. At least 214 Palestinians (including 62 children) and 10 Israelis were killed, with hundreds wounded on both sides.

Although the international community, including the UN, the United States and neighboring Egypt and Qatar, is increasingly lobbying for a ceasefire, the Israeli prime minister has so far stubbornly rejected such an initiative, noting that "Israel's campaign against Hamas continues in full force" and that "it will take time" till the operations are completed and ensure the cessation of rocket attacks on Israel, Index.hr reported.

Reportedly, Hamas even temporarily stopped rocketing Israel during the previous night, but Israeli planes continued bombing Gaza, after which Hamas rocketed the Israeli city of Netivot again in the morning. Although Netanyahu is not ready for a truce for now, it seems that he is not ready to send the Israeli army to a ground offensive on Gaza, which would certainly mean serious losses for the Israeli side in the heavy urban warfare.

Israel has never been able to completely defeat Hamas, which is mixed with the civilian population of Gaza, so in time it decided on a strategy they called "mowing the grass."

It is periodic, but severe military punishment of Hamas for rocket attacks on Israel, which aims to destroy the military capacities of Hamas as much as possible and thus ensure a longer period of peace after the offensive.

But it seems that both Hamas and Netanyahu have a strategic interest in the continuation of the conflict, writes the Washington Post.

Netanyahu, in fact, has great internal political problems. Even after the fourth election in just two years, he failed to form a ruling majority in the Israeli Knesset, and thus no functional government has been formed.

Moreover, opposition leader Yair Lapid eventually received a mandate from President of Israel Reuven Rivlin to form a government after Netanyahu failed to do so.

As the conflicts started, Netanyahu gained political weight, and the "state of emergency" in Israeli cities was mentioned, due to which it is necessary to "send an army to the cities", which Netanyahu has already proposed, to the opposition of many.

"At the moment when the fire broke out, the government that brings change was gone, and Netanyahu came back to life," Ben Caspit, a columnist in the Israeli newspaper Maariv also assessed. Therefore, Netanyahu, according to the Index.hr, can rub his hands because remaining in power hypothetically protects him from trials for corruption, i.e. bribery, fraud and abuse of power, for which he faces up to 13 years in prison.

On the other hand, the growth of Hamas from the end of the eighties (when it was founded as a subsidiary hand of the Muslim Brotherhood) until today is largely the result of the cynical tactics of the Israeli authorities on the principle of "divide and rule".

Namely, they initially tolerated and even helped the growth of Hamas because they rightly calculated that the Islamist Hamas would be the head of the secular Fatah, which was their main enemy at the time, and which enjoyed a certain international popularity due to the image of a left-wing revolutionary organization.

Hamas' interest in a new conflict with Israel, despite the heavy losses it has reportedly already suffered and could still suffer, stems primarily from their struggle for supremacy with the Palestinian Liberation Organization, or Fatah, led by the current president of the Palestinian Authority, 85 year old Mahmoud Abbas.

Abbas even canceled the Palestinian elections scheduled for this month, the first since 2006, citing the impossibility of holding them in East Jerusalem, but many analysts believe he did so out of fear of a likely victory for Hamas, which now presents itself as protector of Jerusalem and the Palestinians who are frustrated by the diminishing chances of ever gaining their state and freeing themselves from Israeli occupation.

In other words, the war brings additional political capital to Hamas, even at the cost of terrible destruction and lost of human lives in Gaza.