Vučić for Chinese media: A friend in need is a friend indeed PHOTO

President Vučić stated that he hopes to hear more about the Chinese experiences at the summit of China and the countries of Central and Eastern Europe. 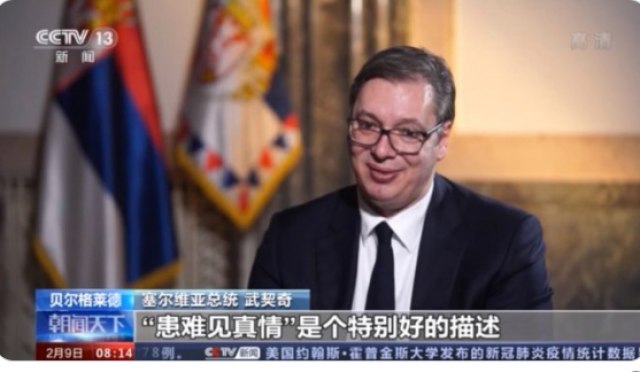 The summit is scheduled for today, and the Chinese Ministry of Foreign Affairs announced earlier that Chinese President Xi Jinping will host the virtual China-CEEC summit and give a keynote speech.

"I am very interested in President Xi's speech, I want to see his view on the global future and his view on our cooperation, all of us with China, and to see what China's plans are," Vucic said in an interview with the Chinese Media Group.

Noting that the Belt and Road initiative (BRI) has facilitated cooperation between China and CEEC, the Serbian president said he hoped to strengthen economic ties with China and unite in the fight against COVID-19.

"A friend in need is a friend indeed. We are so grateful to you for your great support, your great help to our country and we do not hide it. We are waiting for the medical equipment, it doesn't matter if it's respirators or vaccines. So, I would like to thank our Chinese friends sincerely", the Serbian president described Sino-Serbian relations in an interview.

It should be reminded that Serbia received one million doses of vaccines from China in January. Thanks to Chinese vaccines, Vucic said, Serbia is now a leader in vaccination in Europe.

Serbian President Aleksandar Vucic @predsednikrs said he hopes to boost economic ties with China and join hands against #COVID19.
"A friend in need is a friend indeed," he described China-Serbia ties in an interview with CMG ahead of the China-CEEC Summit. pic.twitter.com/QEs0WHHm82