Russia will support Serbia by giving it six MiG-29 warplanes free of charge, as well tanks and scout vehicles, Aleksandar Vucic said in Moscow on Wednesday. 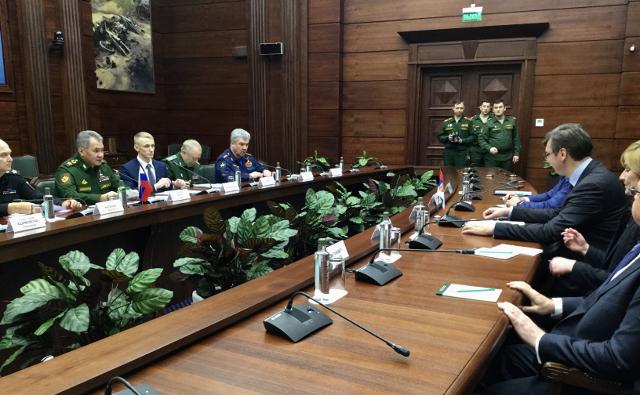 Speaking after his meeting with Russian Defense Minister Sergei Shoigu, the Serbian prime minister said that all three phases of modernization of these planes - currently in service in the Russian Air Force - will cost Serbia between EUR 180 and 230 million.

"If we were buying such planes, that would cost us around EUR 600 million. So you see how favorable the prices are, and how much we have been gifted," the prime minister said.

Vucic noted that these new additions would "dramatically" improve the Serbian Army's operative capabilities - "to such an extent that it will no longer be the same army."

"It's immeasurable compared to what we've had so far. We have also been gifted 30 T-72S tanks, and 30 combat reconnaissance vehicles BRDM-2, with 14.5mm cannons," Sputnik has reported Vucic as saying.

The prime minister added his meeting with Shoigu "and the top of the entire military industry" today was "very long," and that during it, he reiterated Serbia's military neutrality.

"We've improved our very good friendly relations. The most important thing is that we will be making joint three and five-year plans of cooperation, because we are a country that needs a lot and wants everything at once, but that's not possible," he remarked.

Vucic then jokingly noted that Serbia's MoD officials "asked for all kinds of missiles," prompting him to at one point intervene and tell them that "the only thing they didn't ask for are nuclear weapons" - to which Shoigu also laughed.

As for air defense missile systems, Buk M2 and Tunguska - "we agreed to work on this together, but it concerns 2018, which is in a year's time," the prime minister said.

At the same time, he stressed that the position of Serbia as a neutral country will not change.

"I hope that we can improve our cooperation - political, economic, military - to a very high level. I hope you will be our guest in Belgrade, and that we will be good hosts. I'm completely certain there will always be very good relations and best possible cooperation between our two peoples and states, " Vucic told Shoigu, according to RIA Novosti.

"Once again I want to confirm that we remain a neutral country, as I have already said in Brussels, in Washington... That is our stance, nothing has changed on this issue," said the prime minister.

Vucic also wished a happy New Year to Russians, "and expressed his hope it will bring a better situation in the country."

Sputnik is reporting that Shoigu "held an informal meeting with Serbian Prime Minister Aleksandar Vucic on Wednesday and thanked Belgrade for its support of the Russia-initiated humanitarian operation in Syria's Aleppo."

"We are grateful to Serbia for its support of our initiative to carry out a humanitarian operation in Aleppo, as well as for the delivery of a humanitarian aid package to Syria. Serbia has put words into action and demonstrated its readiness to help the Syrian people in these difficult times," Shoigu said at the meeting.

According to TASS, Shoigu also made a proposal to hold joint air force drills between the two countries - similar to BARS-2016, organized in October in Serbia - every year.

He said that trilateral exercises, such as the recent Slavic Brotherhood, organized by Serbia, Russia, and Belarus, are also useful, and announced that plans will be drawn up soon for 2017.

The Russian minister also said his country was ready to intensify cooperation with Serbia in the field of military education.

Vucic and Shoigu are expected to finalize agreements on Serbia's purchase of modern fighter planes and discuss all other aspects of military economic and military education cooperation, Vucic's office announced earlier.

Ahead of that meeting, Vucic visited one of the training facilities for the Russian combat aviation, where he attended a presentation of aircraft and military equipment.

The meeting with Shoigu also be attended by Serbian Defense Minister Zoran Djordjevic.

Vucic said earlier he would discuss a purchase of six MiG-29 fighter planes, which he said would make Serbia's skies and people more secure.

"We are in talks about getting six planes, which would mean we would have ten MiG-29s in our resources," he said, noting he was proud Serbia would pay for the purchase with its own money.

According to reporters, while in Moscow, the prime minister will also discuss the acquisition of Buk air defense missile systems. The MiG-29 should be delivered to Serbia by the end of March.