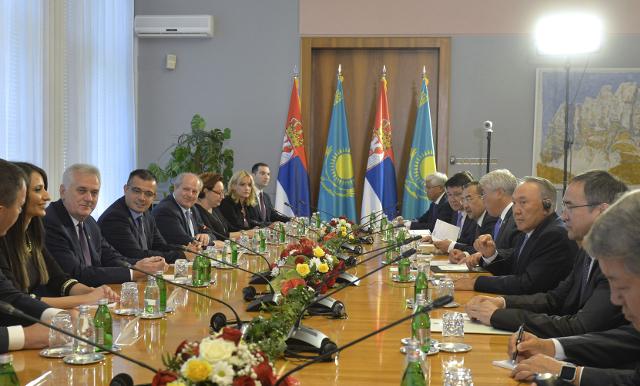 "We remain consistent in implementing European integration as our foreign policy priorities, but we give full support to other integration processes, too, such as the Eurasian Union," Nikolic said in Belgrade after the signing of five bilateral agreements at the beginning of the official visit of President of Kazakhstan Nursultan Nazarbayev.

He said that he expects Kazakhstan to help Serbia reach agreement with EEU member states on the issue of lifting the customs duties and added that today the president of Kazakhstan gave his guarantees that a contingent of Fiat cars manufactured in Serbia would be imported to this market free of customs fees.

The Serbian president said that he and Nazarbayev concluded that economic cooperation was lagging behind overall relations, which is why he gave his assurances to the Kazakh leader that Serbia is a healthy partner for investment, for participation in privatization of Serbian companies, "or for any other form of cooperation in areas such as the petrochemical industry, agriculture, tourism."

Nikolic also said that he and his guest agreed it was necessary to form a business council, which would be tasked with "concretization" of economic cooperation and would consist of entrepreneurs and companies from both countries.

Nikolic expressed his satisfaction over the signed bilateral agreements which he said would strongly improve the overall friendly relations, especially an agreement on cooperation between Serbia's Vojvodina province and the Almaty region of Kazakhstan, which will connect the two countries economically.

Nikolic also said that Serbia will participate in the international exhibition EXPO 2017 in Astana.

Kazakhstan's President Nursultan Nazarbayev said Wednesday the talks he had with Serbian officials earlier in the day show a general aspiration for expansion of cooperation between the two countries and that his country will support the cooperation with Serbia within the Eurasian Economic Union (EEU).

We know Serbia wants to form a free trade area and Kazakhstan, as a member of the EEU, will support that, he said.

Nazarbayev said the two sides agreed on closer cooperation as part of Kazakhstan's activities as a non-permanent member of the UN SC for 2017-2018.

The agreements on cooperation we signed today are the beginning of cooperation in the legal sphere with the aim of facilitating direct contacts between our nations; a visa-free regime is in force and the key goal of the negotiations today was to activate trade and economic cooperation, he said.