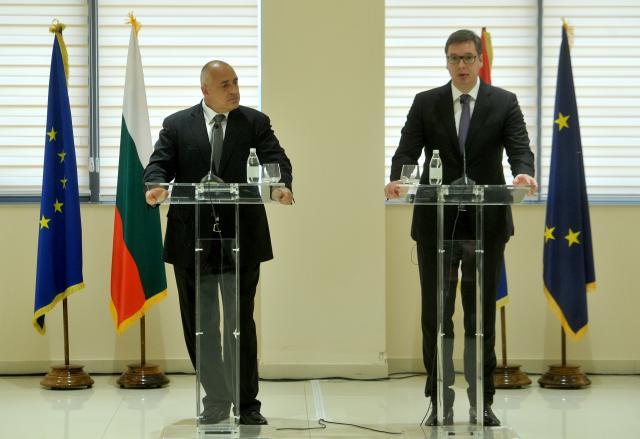 Addressing a news conference after the meeting, the president said that, when it comes to the summit planned for mid-May, "a lot of time is ahead of us and a lot of things can happen, and it's important to do everything possible to preserve peace and stability in the Balkans."

Any kind of conflict would set the region back one hundred years, he said, and added:

"I tried to convince Borisov that Serbia will do everything in its power to preserve peace and stability, and that we will respond patiently and tolerantly to inflammatory statements, and thus try to solve our problems in the region, because any conflict would set us back one hundred years."

He also thanked Borisov, whose presence in Mostar he considers very important, for "the serious way he considers the situation in the region, as the prime minister of a country that holds the EU presidency."

When it comes to bilateral relations, especially economic ties, Serbia and Bulgaria "have no problems," said Vucic, instead they are increasing trade, which now stands at 1 billion euros and is growing each year.

Speaking in Mostar on Monday, Vucic announced that he would speak about the format of this gathering only after his meeting with European and world officials who will visit Serbia in the coming days. He added that he "hopes a good solution for everyone will be found."

Vucic also said that he expected "a long bilateral meeting with Borisov" on Tuesday.

Although Bulgaria said the summit in Sofia would not be dedicated to EU's "enlargement" but rather to "European perspective, development, and cooperation with the region," Spain is conditioning its presence with Kosovo not being mentioned as a participant, but only named, while the presence of Pristina's representatives should be "sidelined."

Bulgaria in the meantime repeated that work was still ongoing to organize the summit, and that the principle of Kosovo's status neutrality would be respected.