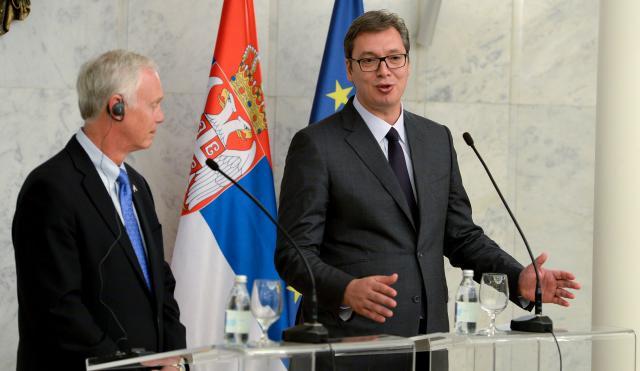 Johnson was in a joint news conference with Vucic after their meeting in Belgrade on Tuesday when journalists asked about "how he saw" the humanitarian center (RSHC) located in Nis, southern Serbia - when, according to Tanjug, he replied that granting immunity to this center would not be in the best interest of the people in Serbia in terms of building the economy and foreign investments.

"In order for capital to come here, you need as little corruption as possible, and the rule of law as an indication that the state is really moving towards market capitalism and stability, and, unfortunately, President of Russia Vladimir Putin demonstrates the opposite," Johnson said.

Vucic then said that Serbia is making its decisions in the line with its interests, and stressed that "we have not been exposed to any kind of aggression on this issue."

"In accordance with the interests of an independent and stable Serbia, we will be making our decisions," Vucic underlined.

He thanked the chairman of the US Senate's Subcommittee on Europe and Regional Security Cooperation for his "sincerity and openness" and added that he "has always been like that - just as is our stance."

As Vucic said, "we have different views around Kosovo and Metohija, but we can always talk about it in an open and honest way."

"No matter how difficult it may be for us, it's healing for our society, and I think it's good that our American friends want to hear our stances and opinions," Vucic said.

Speaking about Washington views on Russia's influence in Serbia, Johnson said he would like Russia to be a "friendly rival" of the United States and of "the Western civilization" - while on the other hand, "we have the situation where we have become a kind of enemies."

According to him, after the breakup of the Soviet Union, there was "a very good opportunity to work together for the benefit of all people" - and the United States was ready to be a friend, not a rival to Russia - but it was up to President Vladimir Putin to make a decision.

"We are working to consolidate our resolve and for everyone in Russia to realize that we will oppose harassment and aggression," Johnson said.