The Special Anti-Terrorist unit (SAJ) of the Serbian police conducted a demonstration exercise on Tuesday, with the scenario being the arrest of terrorists. 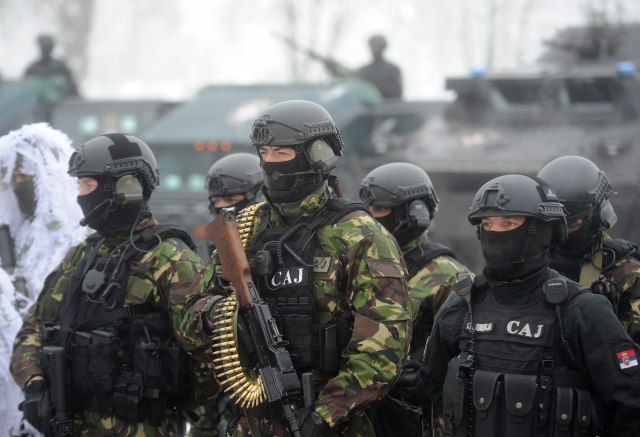 This took place at their base in Batajnica, near Belgrade, as the unit is marking the 40th anniversary of its establishment.

SAJ officers demonstrated a clash with terrorists who occupied a building and a bus. The exercise was attended by Deputy Prime Minister and Interior Minister Nebojsa Stefanovic, and other officials.

Stefanovic was earlier in the day welcomed by the members of SAJ who reported to him, after which the minister laid a wreath at a monument to the police officers killed in the line of duty.

The minister said that investments into this elite unit will continue and that it will be one of the best equipped units of this type in the world.

Stefanovic added that 40 years of existence of SAJ is a big celebration, as this unit has passed the test of time.

He stressed that "in our country the situation is good and stable, and the people and the police trust this unit."

Stefanovic thanked SAJ members for their "enormous patriotism" and "readiness to sacrifice their lives in order to protect their country and people."

SAJ was the first special unit of the Serbian police, established in 1978 in order to deal with highest risk tasks while combating terrorism and crime.