Aleksandar Vucic says he was never been more worried because "surveys show that Serbian citizens support maintaining the status quo in Kosovo and Metohija." 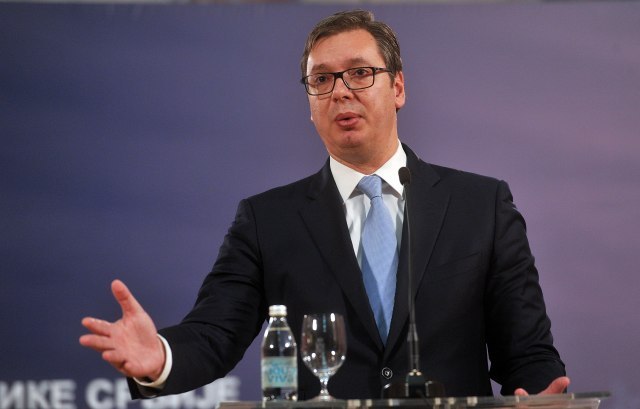 "I see that Serbs and citizens of Serbia do not want to solve the problems in Kosovo and Metohija, and it seems to me that we do not understand what we are dealing with," the president told RTS, and added:

"Surveys say citizens would like the status quo to remain, which is an impossible state. Who guarantees you will retain the status quo, neither Europe nor the world, nor the Albanians who are 91-92 percent in Kosovo and who already have a confirmed statehood from the West, want it."

The president said that he understands well what the people are telling him, but added that he is "not guided by that, but rather by what he sees and knows, and he sees better because of the place he is in."

"The question is what we will do if there is a conflict, so I spoke all the time to find a compromise. It was my fight like David in front of Goliath that is the whole of the West and the Albanians. I am struggling to get something for Serbia and the Serbian people, I have not been at the brink of getting something, but some had started to listen to us - but not in Serbia," Vucic said.

He also said that citizens' support for Serbia joining the EU "has never been lower" - according to him, due to the fact that the EU is "not fair to us" and does not behave "absolutely neutrally toward the Albanians and us."

"We have to fight to stay on the European track, because the train cannot run off the tracks. We need a policy to be tough to try to get something back and not lose anything we've never lost," Vucic said.

He said that "this afternoon" had "a tough conversation with some people in Europe" and added that he would not agree to blackmail and pressure to talk about the surrender of Lake Gazivode (hydro-power complex in northern Kosovo).

"They have a lot of proposals, only thing they don't have is the Albanians lowering the taxes ... There are other ideas, they are full of ideas, but I'm not ready to listen to that," Vucic said.

He said that America is to the Albanians "both the mom and the dad, and the rest are aunts - England, France and Germany" and added on the occasion of Kosovo President Hashim Thaci's visit to the US that he "did not even have to go there, as he would always receive support."

"We are fighting, we have the support of China, Russia, of several countries. And is that enough? Our position is tough, we are trying to keep the position on the board, to at last draw," Vucic said.