"People in Kosovo hostages to rogue policy, question for EU"

"Pristina's decisions show that citizens of Kosovo and Metohija have become hostages to a rogue policy, (removed) from the European values and the rule of law." 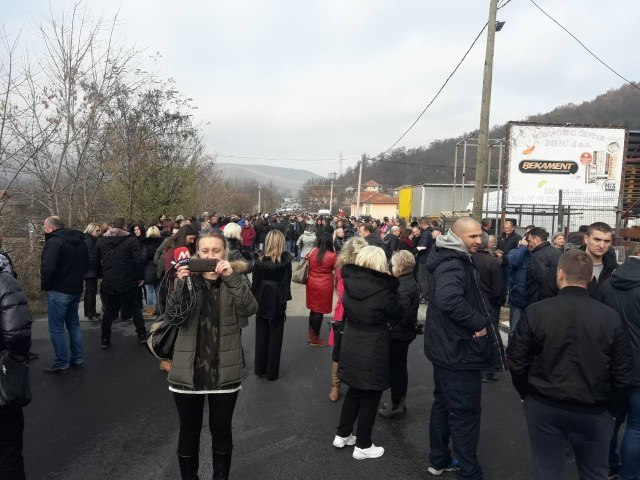 Jadranka Joksimovic, who is minister for EU integration in the Serbian government, warned about this on Friday, in a statement for Prva TV.

"The greatest damage is sustained by the people in Kosovo and Metohija, among which are primarily Serbs, but also all other citizens in KiM (Kosovo and Metohija). These decisions (by Pristina) show that the citizens of Kosovo and Metohija have hostages of a policy that is totally opposed to fundamental European values ​​and completely rejected by the rule of law. This is a question for the European Union," Joksimovic pointed out, speaking for Serbia's public broadcaster RTS on Friday.

According to Joksimovic, besides the part dealing with the (Pristina-Belgrade, EU-sponsored) dialogue, and protection of Serbs (in Kosovo) - this "rogue (Pristina) policy" is an issue for the EU, "which cannot silently look on as fundamental European values ​​are literally burned down and destroyed in Kosovo."

"This is the real question - a rogue regime or a rogue elite, from the European values ​​and the rule of law, and the hostages are the citizens," Joksimovic warned.

She pointed out that the introduction of a 100 percent taxation of goods coming from central Serbia and BiH is purely a political decision.

"It ha nothing to do with the economy, and there is no dilemma about what this is about. There are no elements for calling out both side,s and I do not know what the goal is. The most important thing is that this Pristina policy shows the complete lack of its will and capacity to implement the commitments it overtook, because the first trait of sovereignty, to which they are constantly referring to, is to fulfill the undertaken obligations," she said.

Joksimovic recalled that the Brussels agreement was signed by Belgrade and Pristina (in 2013), but also by the EU as an intermediary and guarantor, and pointed out that "one can no longer speak only about the stance towards Serbia and the Serbs, but also about the stance of Pristina towards the EU."

"The obligation of the international community is, among other things, to protect the citizens of Kosovo who are impacted by the so-called Kosovo government," Joksimovic emphasized.

The minister recalled reminded that Pristina signed the Stabilization and Association Agreement (SAA) with the EU, which, as she pointed out, is the highest level of Pristina's contractual relationship with the EU, and stressed that the mechanism of that contract clearly stipulates that those who do not respect it are primarily undertaken countermeasures against - before such contracts are suspended.

"The concept of the Western Balkans as a European region is also being destroyed here, and it isn't just Serbia and BiH that is affected. The EU must show if it wants the stability of the Western Balkans and that the European order of peace and stability is being applied and respected in this region, it must let it know not only rhetorically and with strong condemnation, but by undertaking the mechanisms to protect the stability of this region and own European values ​​in this region that are being brutally attacked," Joksimovic emphasized.

When it comes to the dialogue between Belgrade and Pristina, Joksimovic said that the situation is completely clear, stressing that Pristina "not only failed to fulfill its obligations under the Brussels agreement - first of all I am referring to the establishment of the Community of Serb Municipalities (ZSO), but has with unilateral moves showed a deficit of any capacity to respect agreements, but also a great capacity for threats of violence and the undermining of what has been agreed upon."

According to her, Pristina clearly showed that there it has no will, no capacity or intention to reach a solution through dialogue.

Asked whether the absence of dialogue could delay the planned opening of (Serbia's EU accession negotiations) chapters in December, Joksimovic said that the EU must first show that it protects its own values ​​in this case.

"We expect it to show that it protects its own rules and procedures regarding the decision-making about the the opening of chapters. Serbia has made progress in chapters 23 and 24 (rule of law), the other element is progress in chapter 35, i.e., (Belgrade's) implementation of the Brussels agreement. Now, the (EU) can only conclude that there has been no progress because of Pristina - but also an additional undermining of the atmosphere by violating agreements and undermining regional economic relations and ultimately endangering citizens' rights," she said, adding that this was "not in no way reflected on the decision on chapter-opening."