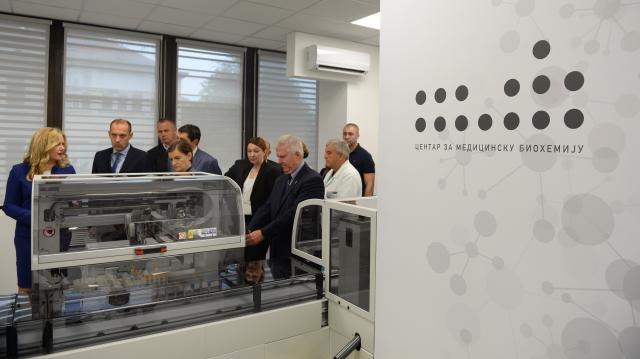 It is worth EUR 1.5 million and has been donated by US company Abbott, the government announced.

Speaking at the opening of the central laboratory of the Medical Biochemistry Unit of the Clinical Center of Serbia, Brnabic expressed gratitude to US Ambassador to Serbia Kyle Scott for his mediation in granting this donation, because owing to it, Serbia is now among the five countries in the world, namely Germany, England, Belgium and Israel, that have this type of diagnostic laboratory.

She underlined that the Serbian government invests in health care, and the reform of that sector is one of the most difficult and demanding ones.

She added that the state is doing everything so that doctors and medical staff remain to work in our country.

We are working on the construction of a new and reconstruction of the existing infrastructure, on improving the conditions of work in the health system and increasing salaries and employing more doctors, medical personnel, nurses and technicians, the Prime Minister said.

Minister of Health Zoran Loncar said that smaller laboratories within the clinics of the Clinical Center of Serbia will cease to exist, as most will pass to this new laboratory that will work 24 hours a day.

He pointed out that the state is working to increase salaries of health workers, but that migration of doctors occurs in all countries towards those that have a better standard and higher salaries.

Loncar recalled that recently the state decided to give employment to the 100 best young medical students and that this will not affect current job openings and the employment process in health institutions.

Asanin said that 1.2 million patients pass through the labs of the Clinical Center of Serbia annually, and that 12 million analyses are made.

He added that the laboratory has not been updated for 30 years. In the new laboratory 1,500 tubes will be processed at one time and over 5,000 analyses.