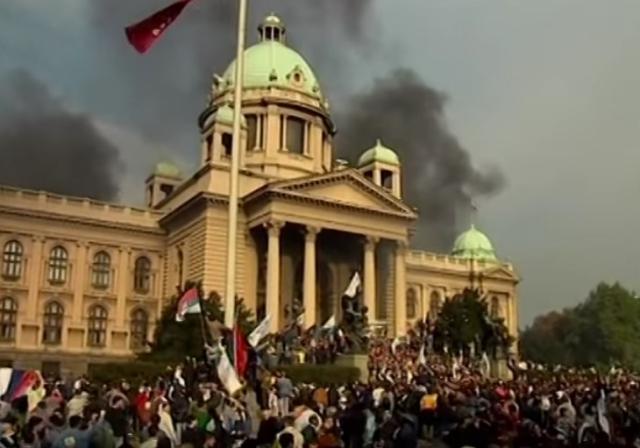 The demonstrations started after Milosevic refused to recognize the results of the election for the president of the Federal Republic of Yugoslavia (SRJ).

In the September 24, 2000 elections, Milosevic lost to the DOS (Democratic Opposition of Serbia) coalition candidate and leader of the Democratic Party of Serbia (DSS) Vojislav Kostunica.

Demonstrators started arrived in Belgrade on October 5, in front of the then Federal Assembly - today the National Assembly of Serbia - from all over Serbia in dozens of kilometers long columns of cars, buses and trucks, using bulldozers to break through police roadblocks.

The police used tear gas during the morning to prevent demonstrators from entering the parliament building, but failed. The building of the Federal Assembly was broken into, damaged, and set on fire, as well as the building of the state broadcaster RTS in Takovska Street.

The police quickly ceased to resist, and largely joined the citizens.

In the evening hours the new SRJ President Vojislav Kostunica addressed the citizens from the terrace of the Belgrade Assembly, and the following day, October 6, Milosevic conceded and congratulated Kostunica.

Jasmina Jovanovic from Milosevac near Velika Plana died during the demonstrations after falling under the wheels of a truck. Momcilo Stakic from Krupanj died of a heart attack.

In April 2001, Slobodan Milosevic was arrested for financial fraud, and two months later he was extradited to Hague Tribunal, where he was put on trial for genocide in Bosnia-Herzegovina, and war crimes and crimes against humanity in Croatia and Kosovo. He died on March 11, 2006, from a heart attack, in his cell in the Hague Tribunal.

On the occasion of 17 years of democratic changes, a press conference will be held at noon in front of the National Assembly, where the president of the Democratic Party, Dragan Sutanovac, will speak.

In addition, a Youth Party Forum's action will be held at 17:00 hours at Nikole Pasica Square in Belgrade.