Serbian Prime Minister Aleksandar Vucic on Wednesday received a delegation of the Communist Party of China. 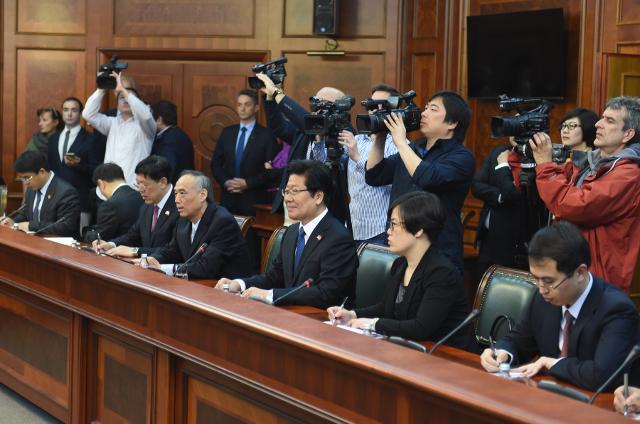 During the meeting, Vucic said that the friendship between two countries was "made of steel" and that China has a sincere friend in Serbia and can always count on its support.

"We are proud of that, we do not hide it in any place," Vucic said, and invited the Chinese delegation to take a walk in Belgrade, "and see the friendship of the ordinary people - Serbians love China and the Chinese people very much," he said.

"Our policy is immutable - it is the policy of One China and, for us, there is no deviation from that, anywhere or anytime," Vucic stressed, and thanked China for supporting the sovereignty and territorial integrity of Serbia.

Vucic also told the Chinese delegation - led by Zhang Chunxian, a member of the Politburo of the Communist Party's Central Committee- that Serbia and China enjoy fruitful cooperation in all fields, and noted that both China's president and prime minister have visited Serbia over the past three years.

"We are very happy to see you in Serbia, welcome to our country, feel at home," Vucic said, and extended special greetings to Zhang Chunxian, who he said did Serbia a great honor by visiting.

"It was with joy that I received the news of your victory in the elections for the President of the Republic of Serbia. Allow me to extend my sincere congratulations and best wishes on behalf of the government of the People's Republic of China and in my own name. I am confident that under your leadership Serbia will achieve even greater success in economic and social development," the message said, according to the Serbian government, and added:

"China and Serbia foster a deep traditional friendship. After the establishment of a comprehensive strategic partnership 2016, cooperation in various fields has developed and deepened, which has brought concrete benefits to our two peoples. China attaches great importance to developing relations with Serbia and is ready for further strengthen the traditional friendship between the two countries, as well as to deepen mutually beneficial cooperation. I am confident that with the joint efforts of the two sides, the comprehensive strategic partnership between China and Serbia will constantly advance to new levels."