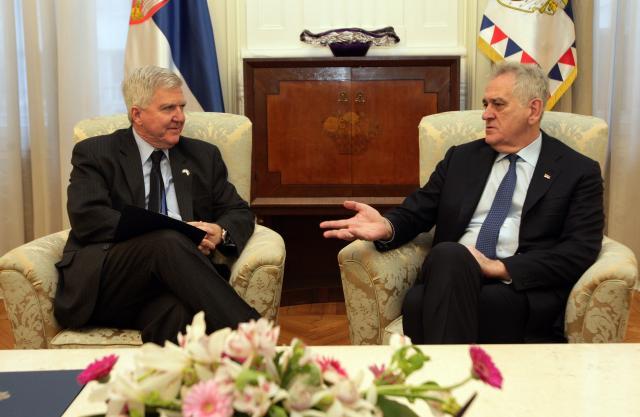 Nikolic told him that he "understands the U.S. is unconditionally supporting a thing whose creation it directly influenced," and that Washington "caused a lot of trouble by exercising its will."

The president also expressed his hope that such conduct would stop when the new U.S. administration takes over.

A statement by his press office quoted Nikolic as saying that "bilateral cooperation between the two countries is on its way toward recovery," and that he expects Serbia-U.S. relations to be given "a new context once the new U.S. administration is in place."

"Citizens doubt whether Serbia can have equal treatment as some other countries, which, it seems, have had better perception in the eyes of the U.S.," he said, and added that Pristina's behavior over a train that on Saturday departed Belgrade for Kosovska Mitrovica but was unable to reach its destination was "completely unacceptable."

"They (ethic Albanians) consider a train decorated with Serbian markings to be a provocation, and they moved against that train with bombs and rifles, without KFOR's approval. Nobody's asking the question of whether going around Kosovo with the markings of a Greater Albania, and publicly promoting that senseless idea, is a provocation," Nikolic said.

The president told the U.S. ambassador that Serbia will never recognize Kosovo, regardless of the pressure exerted by the great powers gathered around promoting that independence.

Scott "agreed with the president that the two sides cannot persuade one another regarding the status of Kosovo," the statement said.

He also "underlined this was not about transportation, but about consent regarding the entry and movement in Kosovo."

The president then noted that the Pristina authorities recently prevented him from spending Orthodox Serbian Christmas in Kosovo and Metohija and reminded his interlocutor that "nothing has been done to implement (the agreement on) the Community of Serb Municipalities," adding:

"I will always speak frankly and openly and protect the Constitution of the Republic of Serbia. I understand that you unconditionally support a thing whose creation you directly influenced. By exercising your will, you've created a lot of trouble, and I hope that this behavior will stop with the new administration."

The U.S. ambassador stressed that his country "supports reforms in Serbia, and the opening of chapters within the EU integration."

"Serbia is a significant factor of stability in the region and relations with neighbors have had their ups and downs," said Scott, adding that "steps forward have been made in normalizing relations with Kosovo, as well as some steps backward."

Scott also said his country was "prepared to build stronger ties with Serbia."

A statement posted after the meeting on Tuesday on the U.S. embassy's website said that Kyle Scott met with Tomislav Nikolic "to review the year that has just passed and discuss future cooperation in 2017."

"The ambassador praised the progress in Serbia on economic stability and growth. He noted the opening of four chapters in the EU accession process in 2016, and said that the USD 4 billion in U.S. investments and 16,000 people working in Serbia for American companies were strong indicators of the strength and vibrancy of bilateral relations. He also pointed out that Vice President Biden’s meeting with Prime Minister Vucic in Davos today is an indicator of the importance of the relationship to the United States," the statement said, and added:

"President Nikolic expressed his views about the need to build even stronger relations in the future, despite the two countries’ different views on the status of Kosovo. Ambassador Scott said that stability in the region is a prerequisite for future progress, and that all should avoid heightened rhetoric. He noted that the U.S. continues to support the EU-led Dialogue between Belgrade and Pristina and that the U.S. encourages both Serbia and Kosovo to seek out opportunities to make meaningful progress in moving toward comprehensive normalization of relations. The two agreed to continue their contacts, and expressed the hope that a new basis for improved relations between the two countries would soon develop."